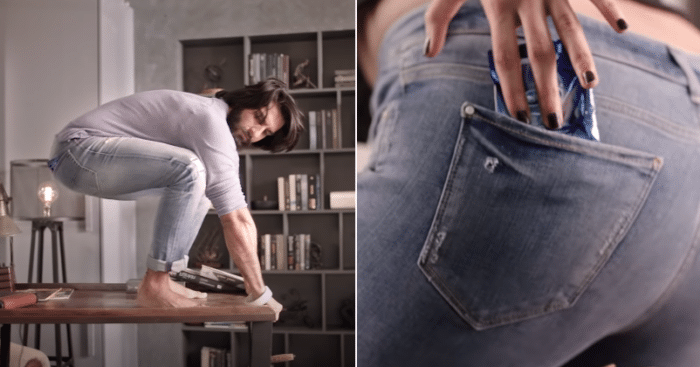 Ever thought the popular condoms brand would launch jeans? Durex came up with its own version of #DurexJeans and surprised all fans. This was brought out by actor Ranveer Singh in a new teaser launched by the brand where the former is seen trying the new jeans which come as a new fashion statement.

Durex wants to reveal its fun and adventurous side by mentioning that the jeans won’t slip like the condoms. Watch the teaser here.

We’re launching Jeans! And Ranveer’s gonna be trying out his first ever. Excited? Well, that’s our speciality! #DurexJeans pic.twitter.com/5UpIJFVBfw

Even though the company did not even release the actual jeans, the condom comes as a jean print in denim color that was also endorsed via the advertisement as shown below.

Through this campaign, the brand wanted to normalize sex. It is not taboo. Everyone does it these days and it is okay to have sex and be open about it rather than stay hushed. The world’s largest condom maker – Durex – has a number of variants in the catalog. Of them, the denim condom sticks well in your pocket and is the go-to last-minute savior in case you get to have some hours of fun.

The denim condom is the slimmest ever condom made that can be bought and carried in your pocket. The company wants to break stereotypes about buying condoms and carrying them around casually and for the past 4 years, has able to break through the norms gradually but surely.

If you check some of Durex’s posts on Instagram, you will find that the company maintains a witty taste for every occasion and new launch to encourage customers between the 18-40 age group to enjoy life and have safe sex.

They posted this in line with the popular girl Shweta who’s Zoom call got leaked when she thought it was mute.