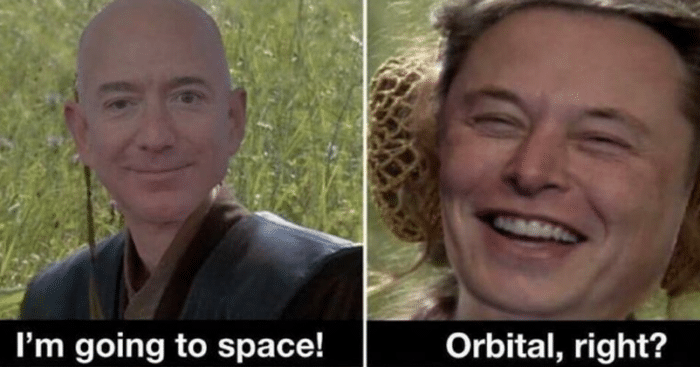 Jeff Bezos and Elon Musk share an age-old rivalry as both of them own space exploration companies. In a recent turn of events, the two famous personalities were caughtt in a debacle which involved Musk comment “haha” on a post which had Bezos talking to Musk about his flight. The meme had their faces superimposed onto Anakin Skywalker and Padme from “Star Wars: Episode II – Attack Of The Clones” which is a popular meme format and has been doing the rounds of the internet.

The meme makes fun of Bezos’ flight which is sub-orbital, that is, it will only just touch the edge of space before coming back down to Earth and not go into orbit. He is scheduled to fly onboard New Shepard on July 20, the spacecraft being made by his own company Blue Origin. The craft will fly just above the Kármán line which is an imaginary line 62 miles above sea-level.

The flight should last around 11 minutes wherein the passengers of the flight will experience 3 minutes of weightlessness. Along with Bezos, his brother Mark Bezos, 82-year-old aviator Wally Funk, and 18-year-old physics student Oliver Daeman will also be travelling in the spacecraft.

Bezos and Musk have been caught up in rivalry for quite some time now. Elon Musk has previously called Bezos’ Blue Origin a “copycat”. He made fun of the company’s proposed lunar lander Blue Moon by calling it “blue balls.”

It’s safe to say that the two powerful leaders have a long way to go in seeing eye to eye.