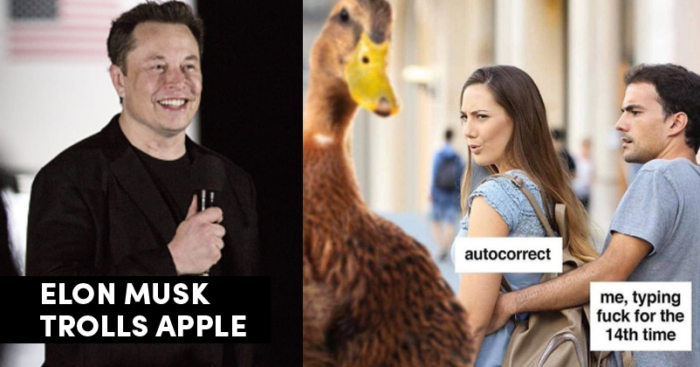 SpaceX CEO Elon Musk has once again made the news but this time its not for his new Tesla Model. In A recent post on Twitter, Musk took a jibe at Apple criticizing the company for the autocorrect feature in its iPhones.

In a couple of tweets, Musk was seen asking Apple to fix ‘awetoekreqt’. Here’s what Musk shared:

Musk further posted that “it’s ducked”. He also shared a meme in order to explain his concern better.

As reported by Business Insider, Musk said while responding to a question on technology decaying naturally as a result of skills set fading over time,

What I was referring to is that technology does not automatically improve…People are used to the phone being better every year. I am an iPhone user, but I think some of the recent software updates have been like not great, certainly feeding into that point. It, like, broke my email system…which is quite fundamental.

When Musk shared his grievance about the autocorrect online, many people shared their complaints in a pretty similar manner.