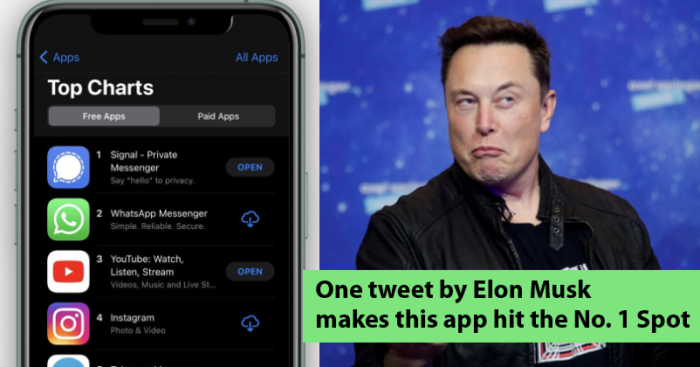 Elon is on a roll as he is breaking records with every passing day. The thing that makes him so special is his futuristic approach and it looks like money isn’t something that attracts him anymore.

He is looking to provide the best quality products to the citizens of Earth and his projects clearly express what this man holds for the future of humanity.

Another interesting fact is that all this is happening when WhatsApp and Facebook backlash for updating their privacy options and asking users to update without giving any other options.

As he does so well, Musk was quick to provide his solution to the privacy problem.  He simply did that with a tweet that read, “Use Signal”.

After Musk’s tweet, so many online users tried the Signal messaging app that the load became too much to handle and a lot of new users weren’t receiving their verification codes.

Verification codes are currently delayed across several providers because so many new people are trying to join Signal right now (we can barely register our excitement). We are working with carriers to resolve this as quickly as possible. Hang in there.

It is now among the most downloaded apps by the app store.

If you are still wondering what Signal is, then let me tell you that it is a WhatsApp alternative app which available to download on Android and iOS. Users can install Signal Private Messenger app Windows, Linux and Mac, also.

What makes Signal special is that it is an encrypted multi-platform texting app which has been made by one of WhatsApp’s co-founder, Brian Acton. It is seen as one of the most secure texting apps in terms of encryption. Other similar apps like Telegram are also seeing an increase in demand.

Other popular messaging apps like Telegram use the end-to-end encryption protocols devised by Signal, in fact.

Elon’s thoughts have been very clear about Facebook and he isn’t a big fan of the social media giant by Zuckerburg. He even deleted Facebook accounts for his companies after being challenged by a Twitter user.