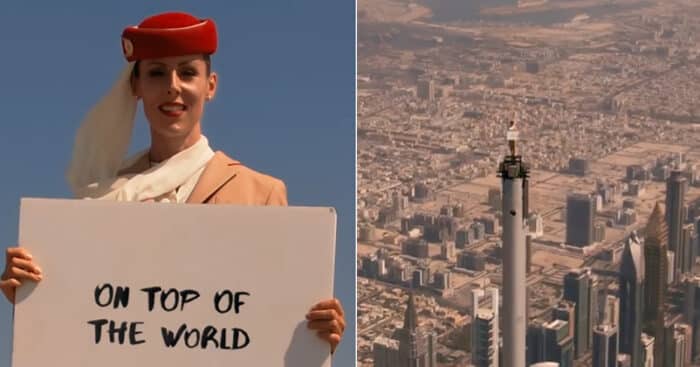 In the most recent video to go viral on social media, a woman standing on the top of Burj Khalifa for an Emirates Airline ad of 33 seconds has caught the attention of the netizens on the internet.

Nicole Smith-Ludvik, a professional skydiving instructor begins the film with a close-up shot in an Emirates uniform while holding a series of message boards that read, “Moving the UAE to the UK Amber List has made us feel on top of the world. Fly Emirates. Fly Better.”

All this while, she has been standing on top of the Burj Khalifa, the famous tower which is the world’s tallest building.

And although the internet questioned the authenticity of the Ad film being shot, Emirates soon enough released a behind-the-scenes video that showed exactly how the ad film had been shot.

The climb to the top took an hour and 15 minutes from level 160 of the tower and a single drone had been used for 5 hours straight to shoot the entire ad film in one continuous take.

The ad film was shot at 828 metres above ground level, making it to be one of the highest ad films ever to be filmed. The ad was conceptualised by the airline company in collaboration with Prime Productions AMG.