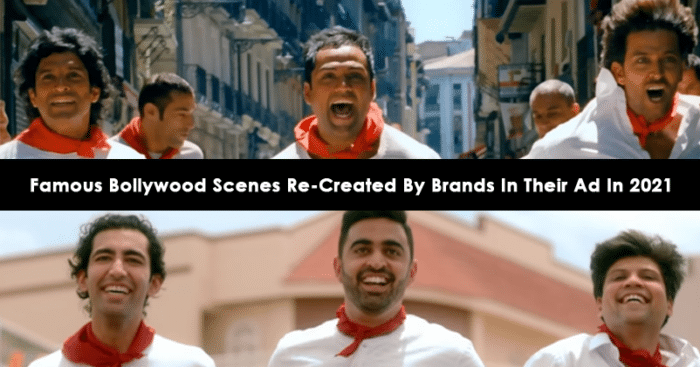 The Indian ad game has always been very creative. Since the beginning, brands would put in a lot of time, effort, and money to ensure that the best adverts were rolled out to the viewers.

Some have left a lasting impact after decades. To ensure that their adverts do the same, brands today have been rolling out some of the most creative ad campaigns. While there are many popular themes, the one where Bollywood actors are recreating some of the most famous scenes has created a lot of buzz on social media.

Since the onset of the pandemic last year, people have been inclined towards living a healthy lifestyle more than ever. Keeping this in retrospect, Cult.fit has launched a campaign, ‘Fitness Is Not An Option’.

The various ads that were launched in this campaign were a recreation of famous movie clips. From Zindagi Na Milegi Dubara, Karan Arjun, to Om Shanti Om,  these ads were perfectly recreated and featured some of the famous faces as well.

Dunzo recently created a lot of buzz with its perfectly curated ad campaigns. The brand was sure to create interesting content by recreating some of the most iconic scenes of Bollywood.

The one where Sunny Deol is seen re-acting his ‘Tareekh pe Tareekh’ dialogue had us all amazed.

Ajay Devgn has been the most iconic actor in the Indian Film Industry. His stunt scenes back in the 90s made him a national heartthrob. The one scene where he was seen riding on two bikes left a lasting impact on all the movie fans.

Mahindra Trucks recreated that iconic scene with Ajay Devgn himself.