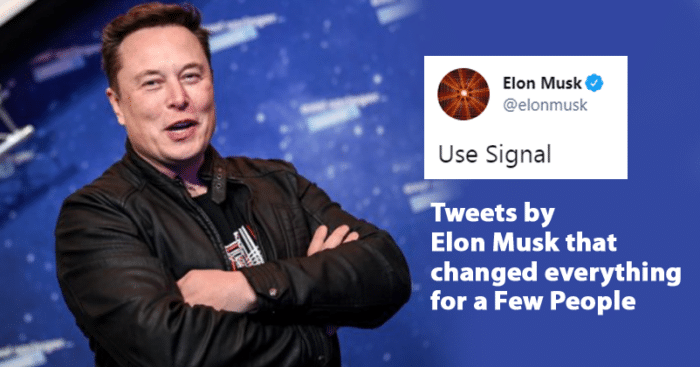 Elon Musk has become a prominent name not just in the tech world but a contributor to the Global economy. His work at SpaceX and technologically advanced Tesla cars have gained a lot of popularity in the past couple of years.

With success comes responsibility, and Elon Musk has been responsible for shaking the stock market with the power of his tweets it seems.

Musk’s influence on the stock market is so strong that one tweet by him can simply make or break a company. It has been proven in the past as well.

Here are the most influential tweets by Elon Musk that tanked or salvaged the stock price of many companies.

Last year in May, Elon Musk went on a frenzy of tweets that effectively tanked Tesla‘s market value. He tweeted ‘Tesla Stock price is too high imo’. The shares of Tesla dropped as much as 12% at that time.

The rant did not end there, Musk went on to further tweet cryptic things about selling all his physical possessions including his house.

Just one stipulation on sale: I own Gene Wilder’s old house. It cannot be torn down or lose any its soul.

As the year 2021 began, Musk’s influence grew on social media. With Whatsapp facing a lot of backlash for its updated privacy policy, Musk came to the rescue, for its rival. Musk just wrote 2 words ‘Use Signal’ and the messaging app Signal became one of the top-ranking applications across the app stores.

GameStop Corp., an American video game retailer, had the best start of the year when Elon Musk chose to share a Reddit thread about users interested in the company’s shares. As a result, GameStop’s shares went into ‘short squeeze’ and the Wallstreet was buying it so much that the share price doubled.

Earlier In May, an unverified account on Twitter called @CryptoWhale said, “Bitcoiners are going to slap themselves next quarter when they find out Tesla dumped the rest of their #Bitcoin holdings. With the amount of hate @elonmusk is getting, I wouldn’t blame him”.

To this Elon Musk Vaguely replied, “Indeed”. Nobody understood what he meant by the tweet but this made the stock price of Bitcoin drop by 20%. Soon after, he clarified that Tesla has not sold any Bitcoin. The damage was done by then.

To clarify speculation, Tesla has not sold any Bitcoin

Dogecoin up on the roof!

Elon Musks’ recent tweet about how he was working with Dogecoin developers to improve its system transaction efficiency did wonders for the cryptocurrency. The shares of Dogecoin were up 10% in the next hour.

CumRocket as the name suggests is a cryptocurrency that is specific in nature. It provides a marketplace for adult content or Not Safe for Work (NSFW) content.

CumRocket coin has surged over 85% after Elon Musk's tweet. We are for sure living in a simulation. pic.twitter.com/iaG3lqXDBN