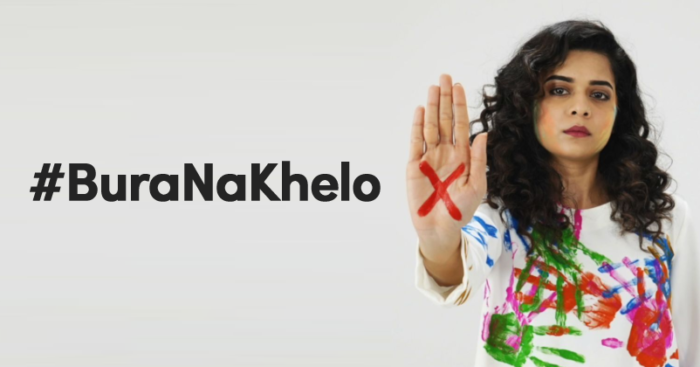 International Women’s Day is celebrated worldwide demanding nothing but just – Equality and the right to LIVE Freely. Having a similar aim, Fbb is voicing a strong point against the bad-touch many women experience during Holi.

The festival of love, laughter, joy & colors is almost here and we just can’t keep calm. Holi is one festival that truly harvests the happiest moments for one and all. No matter what age you are, running around with a fist full of colors is sure to bring out the child in you.

But how many of us can truly relate to the spirit of the festival? Holi despite being the most joyful day, many women in India come across moments that are both uncomfortable and unacceptable. The practice has been going on for centuries and all in the name of ‘Bura Na Mano Holi Hai’. You know what we are talking about here. The fact that some people try to pull off certain acts and are being excused and turned a blind to as ‘slight mischief’ is something not many people talk about.

This International Women’s Day, FBB has taken the responsibility to raise awareness about the dark side of Holi through its latest initiative- #BuraNaKhelo. The campaign educates people on how not to behave during the festival.

As a part of this campaign, Fbb has launched a video featuring Mithila Palker voicing out every women’s opinion and narrating the inner feeling of all women. The brand along with Mithila is trying to spread awareness to ensure that women everywhere are made to feel safe under any circumstances. You can watch the video below:

This Women's Day marks a new beginning for a responsible Holi. It's time we come together and create a safe and joyous Holi for women across the country. Come, tag along to say #BuraNaKhelo and help spread awareness along with Mithila Palkar
Upload your picture with the hashtag #BuraNaKhelo in the comments below and let's come together to play a safe & fun Holi

Over 28 influencers including Sayaani Gupta, Manav Chhabra, Awez Darbar, Shriya Pilgaonkar are supporting the #BuraNaKhelo campaign by posting about the initiative on their social media handles. Also, FBB is celebrating both International Women’s Day and Holi by giving #BuraNaKheloHoli stickers to all customers to make Holi safe for women

Do you guys know what Holi truly stands for? It symbolizes the victory of good over evil. But during holi, we often see instances of women being touched inappropriately and forcefully and the evil over-powering the good. So I've decided to change the norm and say iss holi #BuraNaKhelo holi hai over Bura Na Mano. Are you guys in this with me? If yes, share your holi pictures with a red cross on your palm and use #BuraNaKhelo to stand against all inappropriate behviour with women this holi . . #fbbonline #fbb #NDMPLStarSquad #BuraNaKhelo #Holi @fbbonline

Speaking about the campaign during the press release Prachi Mohapatra, CMO – fbb said,

Freedom of speech is one of the most powerful medium. Thanks to social media today women are voicing out the stories of their march towards equality. Bura Na Khelo is a campaign that speaks for millions of women out there who have been treated in a wrong way someday or the other. This women’s day as we celebrate all our achievements let’s continue to support and encourage our race.

With the aim of removing this ill practice from our society overall, this initiative by FBB is the perfect gift for women around the globe for both International Women’s Day & Holi.

What are your thoughts on this campaign? Feel free to share your opinion in the comments section.