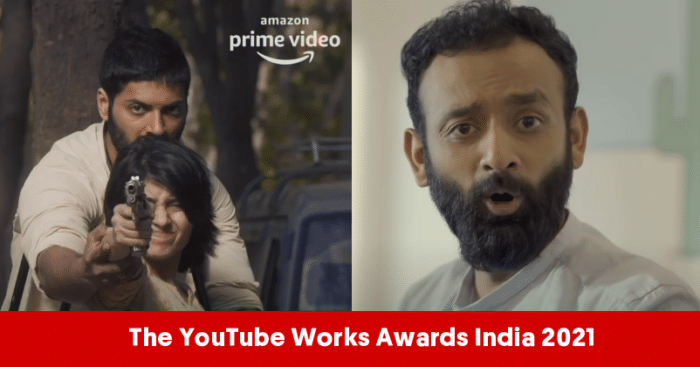 7 categories, 450 entries, 85 screenings and 12 grand jury members- this year’s Youtube works awards partnered with Kantar to celebrate digital campaigns that aimed to create an impact on Youtube. Judged by the who’s who of marketing agencies pan India, let’s take a look at the winners-

DDB Mudra won an award in the Media Innovation category for their Baar Baar Dekho campaign that was designed for Glance, InMobi. Featuring various celebrities in 3 different languages, the campaign helped to reach its desired target audience. This not only helped in establishing the brand and helped cater to over 220 mn unique users, but also experienced a three times surge in keywords on google.

A Grand Prix and a Ruby award were won by Ogilvy India for their ‘Not Just A Cadbury ad’. Last year, Mondelez wanted to increase their sales and at the same time show empathy as well to it’s audience. The ad helped as an ad for every business in the country, every time a box of Cadbury Celebrations was purchased. One way of doing this was by achieving geo-location-based dynamic creative optimization and the team which worked on the ground was responsible for collecting pin-code wise retailer data to have customized ads for 270 pin codes, marketing around 1800 local retailers, that were made with Artificial Intelligence.

Digitas’s India won an award for their work Propah Lady for Puma. This campaign aimed to increase sales in their womenswear category. Featuring India’s women icons, an inclusive but disruptive film was shot which increased awareness around empowerment and gave importance to living life on ones own terms. Within a month, Puma saw an increase of 1 per cent for the first time in 5 seasons to the overall business. This award was won in the long-form storytelling category.

Fancy creating an intellectual property around your product to promote it? SoCheers, PivotRoots did just that for its Mirzapur Season2 ka Bhaukaal for Amazon Prime Video India and won an award too in the multi-video storytelling category. Here, viewers could tap into local news and events which generated interest not just amongst the existing fans but also created a new fanbase. Creating ads that were not skippable, collaborating with popular Youtube content gurus, helped them reach a larger audience and Mirzapur Season 2 topped the list of Top 5 OTT shows in the last week of October with a 42 per cent increase in awareness.

Monk Entertainment in collaboration with Be YouNick won in the creator collaboration category. Their client was UpGrad and this was done to create more professionals to hone their skills using the App. On collaborating with popular YouTuber Be YouNick, they created a web series titled Be YouNick x upGrad Originals-the Office Canteen. They also worked with other content creators on Youtube to further their reach. The show was a huge success as it was shown to be trending on #1 for each episode. a second season is in its offing this year.

Motilal Oswal used 6-second video series to reinforce its target audience the perils of poor investment decisions. Under the campaign Poor Quality Hurts, these video series were created by Mullen Lintas and Social Kinnect which helped them win an award in the 6-second storytelling category. This got them to add 3.67 lakh new customers and achieve a 14 per cent lift in consideration.