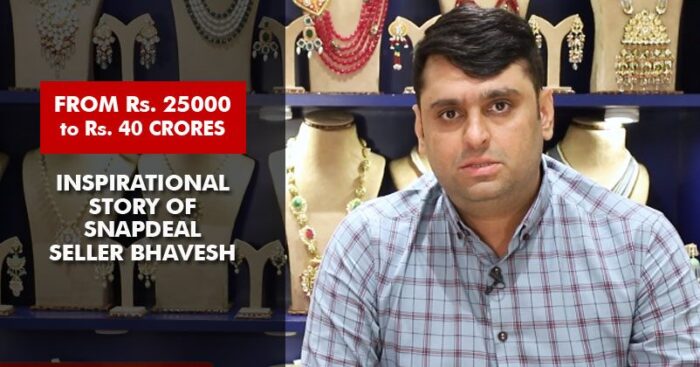 There are always multiple facets to being a part of a business, being the leader of the organization and being an entrepreneur. You start the business, you need to run the business and you ensure the growth of the business, all in a good day’s work.

Such is the story and an inspirational one indeed of Mr. Bhavesh and his brand Sukkhi, a journey that started at home and went global through his efforts!

Bhavesh was a young lad, just 16 years old when he joined his family business as a historical tradition. He learned various aspects like customer interaction, preferences and vendor partnerships during the work in the Precious jewellery business of his family.

His desire to learn was the reason why he also got a job at a Diamond trading company, looking for an industry where he could learn and then start his own stable venture. When Bhavesh later visited Delhi and saw his Uncle working as a Snapdeal seller, an idea struck him!

An Idea that changed lives

With the huge amount of festive sales, his Uncle was forecasting on Snapdeal, Bhavesh was inspired.

He moved ahead with only Rs 25000 and 75 SKU’s and joined Snapdeal as a seller, a seller who received his first order within just 5-6 hours of going live! The number went up to 50 orders per day and since then, there hasn’t been any looking back.

The Snapdeal team even visited Sukkhi’s office, the brand of Mr. Bhavesh and his online fashion jewellery products. The visit allowed the Snapdeal team to understand the business, the process and suggest various improvements in the same.

Such discussions and improvements allowed the company to achieve record sales of 300-400 orders per day. Over time, it’s a 50L sales per month structure, just via the online platform.

Mr. Bhavesh appreciates the transparent and simple system at Snapdeal, be it payment, be it two-way communication and be it execution. The fact that Snapdeal appreciates improvements and embraces suggestions, has an apt problem-solving system and efficient technology is also why Sukkhi has reached such great heights.

Kudos to Snapdeal and Sukkhi, wishing for greater success and greater revenue now!