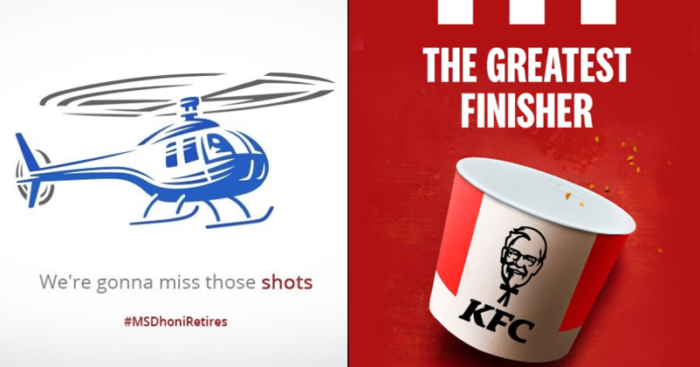 For all the cricket fans, this week has come bearing some difficult news. Mahendra Singh Dhoni recently announced his retirement from international cricket and everyone has been feeling the loss. The entire country was immersed in emotion that was unexplainable.

MS Dhoni has been a true legend. His numerous victories in both International matches, as well as in the IPL, has won various hearts. Throughout his career, Dhoni won three ICC trophies – 2007 T20 World Cup, 50-over World Cup in 2011, and the 2013 ICC Champions Trophy. Proving himself to be one of the greatest captains of the Indian cricket team.

After a 16 year-long intense career, Dhoni announced his retirement via his Instagram handle through a video with a caption reading ‘Thanks a lot for ur love and support throughout. from 1929 hrs consider me as Retired’

Thanks a lot for ur love and support throughout.from 1929 hrs consider me as Retired

While there was not much we could do to convince dhoni to change his decision, many brands both national and international paid tribute, more like expressed their pain, to the star in their own way. Soon after the announcement, the tributes came in flooding all over social media.

Amul India had a very heartfelt goodbye to say to our Mahi.

We wish all the best to M S Dhoni @msdhoni for the next innings in his life! pic.twitter.com/UvgGHYGPI5

Always came through when it was crunch time. #MSDhoni pic.twitter.com/7M7xB62fk7

Disney + Hotstar said something almost everyone was screaming for.

To an incredible journey of our very own captain cool. Thank you for inspiring us to dream big and making cricket more than just a game for all of us. We wish you the best in your next innings. Share with us your best moments of @msdhoni . 🏏 #Dhoni #mahi #LetsIndiGo #Cricket pic.twitter.com/chKC5Sw7Dj

We can try 🔍ing, but there isn't going to be anyone like you @msdhoni.

We like our Chai hot and our “Captain Cool”. You ended this game in style – like always; and we bid you farewell.⁣
⁣#ParleG #Dhoni #CaptainCool #MsDhoni #DhoniRetires #ThankYouDhoni #Cricket #Biscuit #Chai #Game pic.twitter.com/eIW9PLchBD

Ministry of Railways – Dhoni’s former employer had something to say too.

Cheers to the man who started his career with Indian Railways and ended with making India proud. We will miss you as a great performer.@msdhoni#MSDhoni#MSDhoni7 pic.twitter.com/qV5QpUa7og

Soon after Dhoni announced his retirement, Suresh Raina also followed his lead. This came as a double shock for many and people could not believe what was happening.

Netflix India expressed its emotions for both the legendry players in one tweet.

Sunday mood: Watching time travel movies to find a way to go back and watch Dhoni and Raina play again.

Though Mahi has bid goodbye to the international cricket team, we will be seeing him leading the Chennai Super Kings in the coming IPL. It seems after all that all is not lost for all the Mahi fans.