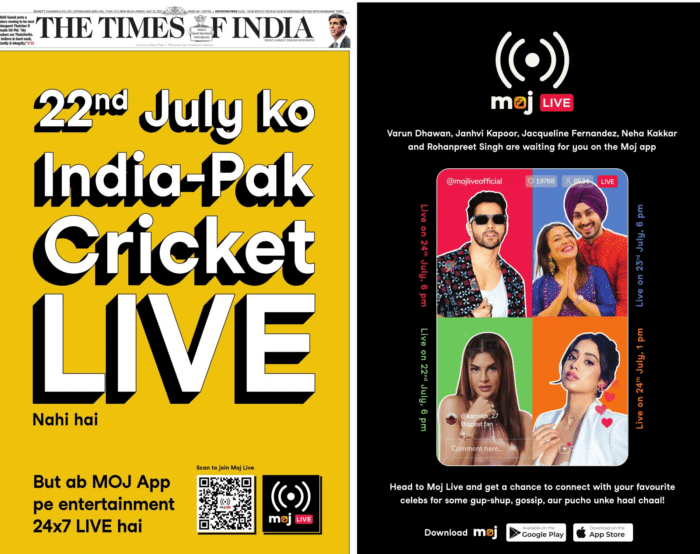 With an eye-catching headline that naysayers may think is slightly cheesy (yet accomplishes the job), Moj first informs you that an India-Pakistan match would be telecast live on July 22nd. The India-Pakistan match is a national phenomenon that no one can escape, and it generates a lot of excitement. Until it doesn’t, with Moj declaring that there will be no India-Pak live cricket match on the 22nd, but instead a Moj Live featuring some of India’s most well-known superstars. Varun Dhawan, Jacqueline Fernandez, Janhvi Kapoor, Neha Kakkar, and Rohanpreet Singh will all go LIVE on the Moj app, where viewers will be able to connect with them for a little discussion or maybe just a juicy scoop! 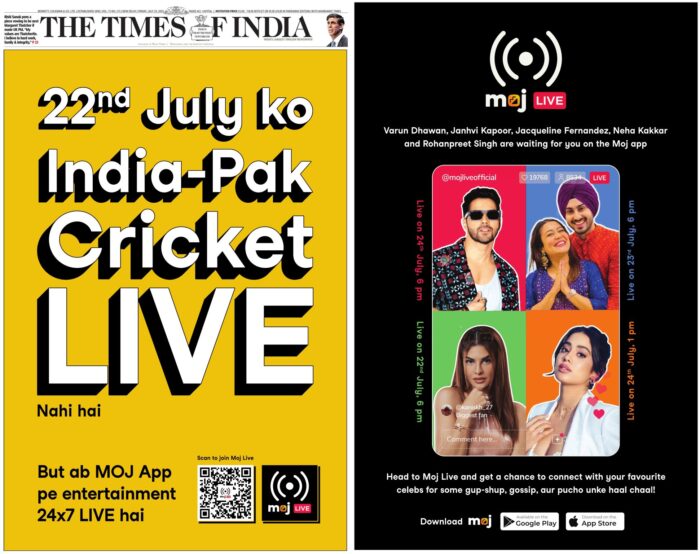 These prominent B-town celebrities are poised to premiere Moj’s all-new LIVE video streaming feature, #mojLIVE – Ek Nayi Duniya. This feature establishes itself as a fresh and innovative way of communicating with fans across India, promising a lot more candid entertainment and a sneak glimpse into the lives of superstars. It also fosters creator relationships and encourages communication amongst people from all backgrounds across India, which is a real and honest aspect.

These celebrities will go live at different times between the 22nd and 24th of July, allowing everyone to participate, engage, and have a great time. These sessions will include a social media creator and a lucky fan, the winner of the #mojLIVE challenge, who will also have the opportunity to speak with the celebrity. Popular influencers such as Bindu, Jannat Zubair, Chinki-Minki, Nikki, and Gima Ashi will also be a part of this event, adding to the excitement.

Everything appears surreal in the realm of social media, making it impossible to tell what is real and what is not. Being real in front of your audience has a cost, but this feature attempts to mitigate all of the drawbacks. It performs an excellent job of establishing a communication link between top celebrities and their fans. Going LIVE on social media had increased dramatically throughout the lockdown period. However, as the world gradually opened up, LIVEs became undervalued and received less attention. This new function revitalises the phenomena and offers a forum for celebrities to examine real-time replies. The realm of user-generated content is gearing up with this new feature being rolled out on Moj!

Are you set to join in for these LIVEs on the Moj App? Tell us what you think about the launch of this feature in the comments section below