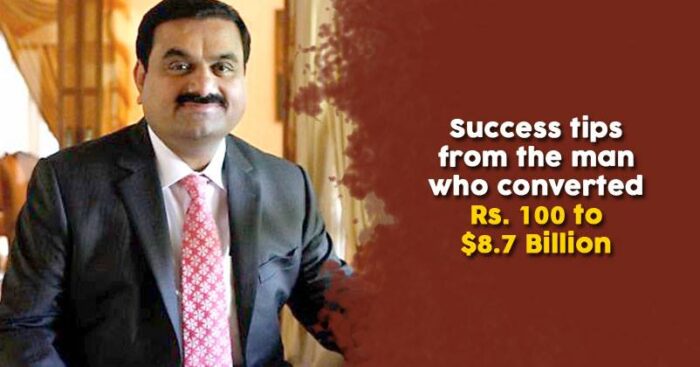 The Adani‘s might not be as popular as its peers like The Ambani‘s, Tata‘s or Birla‘s, but their story is worth a read.

Unlike many businessmen, Gautam Adani didn’t inherit his power and status from his parents. He hailed from a typical Gujarati family. He completed his schooling from Seth CN Vidyalaya in Ahmedabad and then enrolled himself for a Bachelor’s Degree in Commerce at Gujarat University. In his second year of college, Adani decided to drop out. And with only One hundred rupees in his pocket, he took off to Mumbai.

He procured a job as a diamond sorter at the Mumbai branch of the Mahindra Brothers. After taking in all the knowledge about the trade market he set up his own diamond brokerage at Zaveri Bazaar.

After a year, Mahasukh Adani, Gautam‘s elder brother, bought a plastic unit in Ahmedabad and requested him to return home and run the franchise. This turned out to be a turning point in Gautam’s life.

His decision to import polyvinyl chloride, a key industrial raw material, marked his advent into the global trading market. Adani was only 19 at the moment.

According to Forbes 2018, Gautam Adani‘s net worth at the time is estimated to be around $8.7 Billion. Adani powers, Adani Transmission, Adani Ports & Logistics, Adani Realty are some of his legacies.

Gautam Adani is the owner of the largest port operator of India.

The successful 57-year-old industrialist has a lot to teach us. We bring to you 07 Rules for success from Adani‘s book.

Adani had only Rs. 100 in his pocket when he left from Ahmedabad to Mumbai. But that did not hold him back. No matter how risky it may seem, always believe in your dreams and take the leap of faith.

We know how young Adani was when he took such big life-altering decisions. If only he would have been afraid things might have been different for him today. So never give age as an excuse. No matter how old or young you are it is never too early nor too late.

3. Lack Of Education Should Never Be an Excuse.

Adani being such a big industrialist never really graduated. So stop giving a lack of education as an excuse and take steps to move forward in life.

4. Always Stay Humble And Be the Man Of Your Words.

Adani was known to be the most sort after decision-maker even in the most difficult times. Above all, he always kept his word which made him a much credible man in the market. Something we all should learn from him.

Adani‘s journey has taught that never blame or be dependent on anyone. For instance, Adani was never really dependent on the government for their support. He did get his share of it but he never surrounded his work policies on the basis of it.

There will always be ups and downs. So do not mull on the downs and think more about achieving the best.

7. Do Not Try To Control Everything.

One should not stress on something they simply cannot control. Instead, focus on their work entirely.