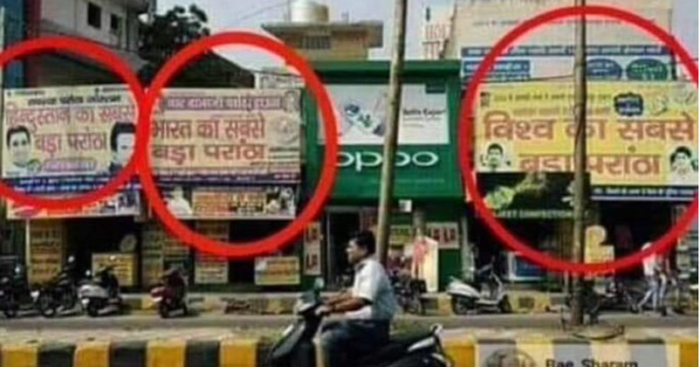 When life becomes a race, you have to speed up to win it. These 3 shops in Rohtak did the same thing by trying to up their game in selling the largest paranthas to consumers in the district. To top it off, their signs were hilarious which made them receive a wonderful response from all their customers. While one shop claimed to be ‘Hindustan ka sabse bada paratha; the other owned up in being ‘Bharat ka sabsa bada parantha’ and the third one apparently boasted about being ‘Vishwa ka sabsa bada parantha’. Shoot for the sky, aim for the stars right? 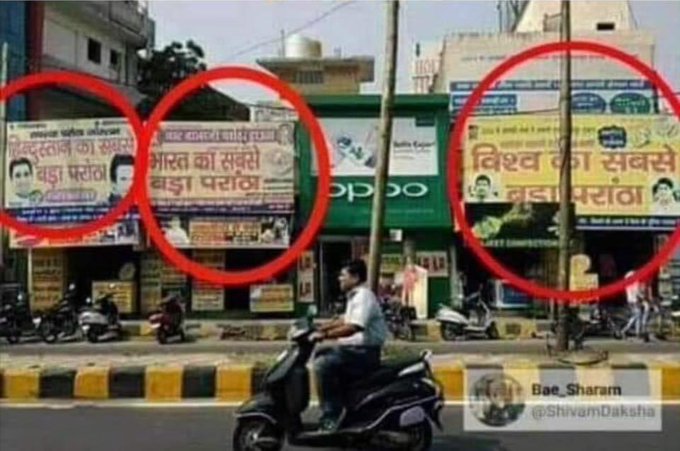 In the above image, all shops are side by side. the competition is surely cut-throat and nothing is better than this advertisement at the moment. IPS Pankaj Nain shared this picture on his Twitter handle exclaiming that this competition was worth the haul and his followers definitely agree. Check out this funny banter below.

Guniess book of world record wants to know location of these shop.😁

Responses with memes are filled on Twitter, and the audience was surely impressed by comparing this competition to UPSC exams, which is the toughest of them all. One even exclaimed about getting this registered in the Guinness Book of World Records. These roadside shops and outlets are quite popular and sell some delicious cuisines at affordable rates. Hence, if you are passing by a highway, you should definitely try these out. It is a great way to explore cultures and also indulge in some local banter through a long journey.

As these shops took on the country and subsequently the world, we are also awaiting a sign on a new shop, perhaps with the declaration of having the biggest ‘paratha’ in the galaxy! How big can you get? Trust us Indians to make it hilariously witty for everyone in the world.

Did you find these signboards as hilarious as we did?