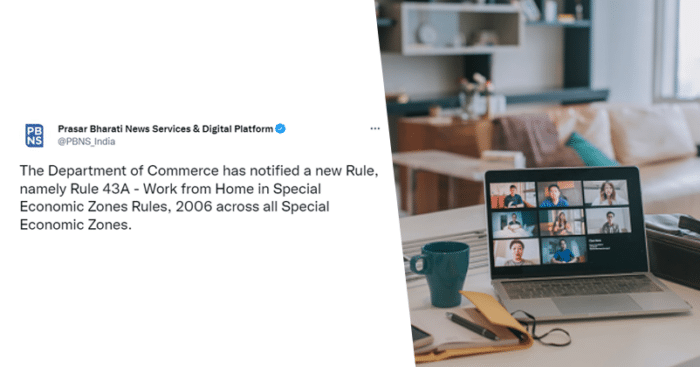 Ever since the pandemic hit the world, we have been adjusting to many ‘new normals’. People started working from home when the offices were shut due to lockdown.

However, almost a year since the lockdown has been completely lifted, many companies have chosen to keep the culture going. There have been many companies who are either working on the concept of WFH completely or have some employees opting for the same.

Since it has become the new working culture globally, the government is making sure that it falls under its jurisdiction.

The Centre on Tuesday inserted a new Rule 43A (work from home) in Special Economic Zones Rules, 2006.

As per the First Post, the new rules came after there were calls from the industry to make a provision for a countrywide uniform WFH policy for all Special Economic Zones (SEZs).

Recently, the Netherlands passed a law to establish home working as a legal right and became one of the first countries to enshrine such flexibility in the law.

As per the new law, employers must consider any request from workers about working from home and give adequate reasons for refusing them.

The new Rule 43A that enables work from home is valid for employees of IT/ITeS SEZ units, those who are temporarily incapacitated, those traveling, and employees who are working offsite.

The notification states that WFH may be extended to a maximum of 50 percent of total employees, including contractual employees of the unit.

The government has also added that work from home would be allowed for a period of one year. However, that period could be extended for another year by the Development Commissioner (DC) of SEZs.