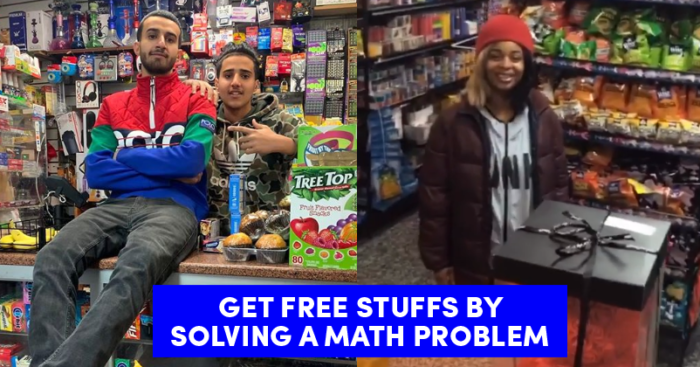 Who doesn’t like free stuff? But it mostly comes in exchange with something that is equally valuable to the things which are given for free. Basically, that’s the analogy that follows, right?

But not at New York’s Lucky Candy Store because the store owner is either a very fun-loving person or comes with a giantly big heart. Well, let’s find out!

India Today reported very fascinating yet amazing news regarding grocery store owner, Ahmed Alwan (20 y/o), who gave out free stuff to his customers in exchange for easy Math problems such as “What Is 5*5?”

At the Tik Tok store with my brother 💪🏽@_youssefalwan_ #explorepage

The store is situated in New York. If you give the answer correctly, you will be given 5 seconds to grab as much stuff you can within the time for free!

Early Valentine special 😂 she was so happy ❤️@worldstar @theellenshow

When interviewed, he answered sweetly that it is just a way of being helpful to society while creating a fun environment. There is no hidden strategy of gaining something out of it but just spreading smiles or maybe a burst of laughter or two!

What go’s up but never comes down?? 😂 #explorepage #meme

He is performing this game with the people who come to the store for 2 weeks now and he mostly targets those who he thinks is in dire need of it and can benefit from the small play. His main intention is that people who cannot afford much can save their money for extra significant things such as paying rent.

If you look at Alwan’s Instagram account, you’ll see it full of videos where the challenge is being practiced and he lets people have whatever they can grab within 5 seconds. Moreover, he is even noticed extending the counting for some! It’s so much fun!

Isn’t it amazing, the ways people come up with to help society? This guy has nailed it, truly!
Source: Storypick