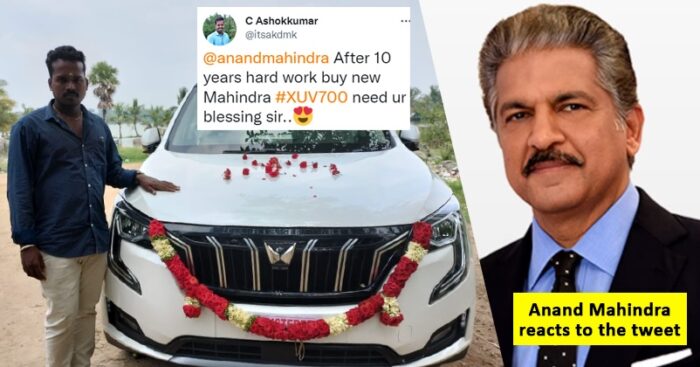 Anand Mahindra, the Chairman and CEO of Mahindra & Mahindra, is quite active on social media. His wit and generosity are a topic of interest amongst Twitterati and yet again he has responded to a fan’s tweet that mentioned how he bought an XUV700 after years of hard work.

C Ashok Kumar is the owner of a mobile showroom in Tamil Nadu. He took to Twitter to celebrate his new purchase and mentioned how it took him 10 years to get to this position.

This new model was launched by the company last year and ranges anywhere between Rs. 13-16 lakhs. Anand Mahindra replied to the tweet mentioning how Kumar had blessed the company with his trust and belief in the company.

Thank you, but it is YOU who have blessed us with your choice…Congratulations on your success that has come from hard work. Happy motoring. https://t.co/aZyuqOFIa8

The XUV700 has all the new features including being Alexa-built, a sky roof, LED-clear view headlamps and smart door handles. Apart from Mahindra, other users too congratulated Kumar on his new milestone. Here are some tweets outlining the same.

Congratulations sir! One day i will also buy #XUV700 😇

Are you a loyal customer of Mahindra & Mahindra? If not, which car model do you own? Let us know in the comments.