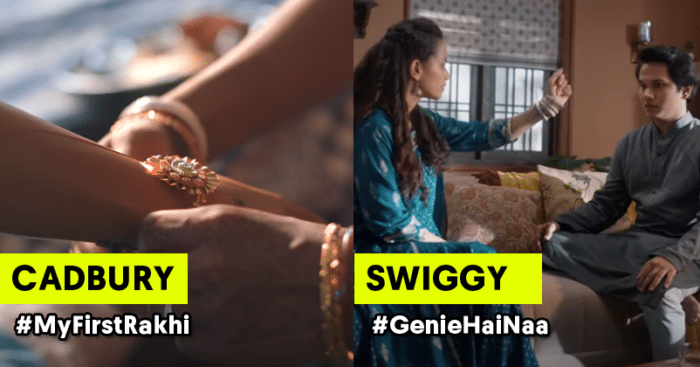 The month of August brings with it the merry occasion of Raksha Bandhan that celebrates the bond between brothers and their sisters. Raksha Bandhan gives us an opportunity to show the love and care we feel for our dear ones and proves to be a pivotal opportunity for brands in communicating with their audience. From social messages to the typical sibling fights, let’s take a look at some standout ads this year.

The Bombay Shaving Company in its Raksha Bandhan ad this year, showcases the special bond that a
sister shares with her younger brother, crediting him equally for all her wins in life. It also highlights role reversal where a sister fulfils army duties and a brother takes care of his mother and their house.

A typical brother-sister nok-jhok ad from amazon but portrayed brilliantly. The sister puts salt in the
kheer made for her brother and the brother effortlessly hides his dismay so that his sister doesn’t
feel guilty.

Promoting India’s first rakhi brand-Sneh and having Huma Qureshi with her brother Saqib Saleem as
brand ambassadors, this Ferns and Petals ad shows the naughtiness and joy every brother-sister duo
relate to.

Every elder sibling exploits the younger one by making them do their chores or fulfilling their
demands. Swiggy has used this concept in a quirky way to show how it delivers rakhis and gives the
younger ones a break from being personal genies to their elder siblings.

The pandemic has forced us to realize that humanity is above all. Keeping this in mind, this edelweiss ad made by Campen Factory shows how necessary it is for a bond to be meaningful and reminds us to celebrate such bonds that stand with us in tough times like these.

Cadbury highlights Raksha Bandhan beautifully this year. The story revolves around that of a differently-abled brother who misses the sensation of wearing a rakhi and is shown to be getting a prosthetic hand that helps him to feel the rakhi tied by his sister.

A long-form digital video, saluting truck drivers who have worked constantly to ensure an
uninterrupted supply of essentials was featured by Gulf Oil.

Designed by Dentsu webchutney and Tanishq, this ad depicts a rather beautiful message of how a
sister-in-law too has a role to play in protecting her husband’s sister making both of them sister’s by
choice and not just by law! The tradition of tying a Lumba rakhi is depicted wonderfully in this ad.