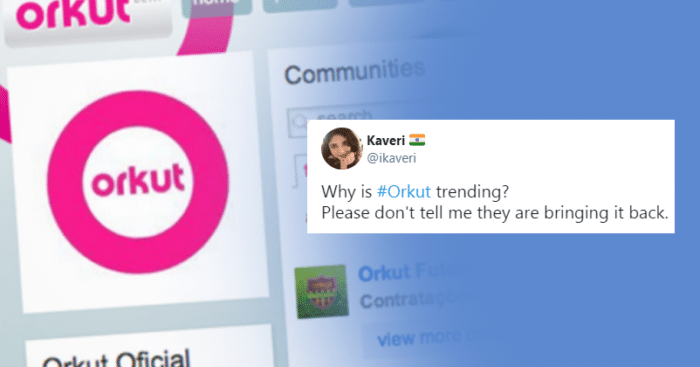 With the panic that arose out of the ‘Social Media Ban’ that was going to be announced wherein platforms such as Twitter, Facebook and Instagram, would be banned, Twitter India was flooded with tweets regarding the same.

Amidst all this chaos, #Orkut started trending on Twitter, in memory of the platform which existed in the pre-social media era. People started tweeting about their memories while a few chose to also express their disdain towards it.

The term #Orkut brings always a smile to my face. Only those who are in their 30s know the value of this word 😍#Orkut was the best. My first social media experience. Miss orkut pic.twitter.com/FiANqlLRD7

I remember using it in college and it was so much fun and easy to use. Writing testimonials, visiting friends page may at times spying through the scraps was a good past time. #orkut #banned #TwitterBanInIndia

Why is #Orkut trending?
Please don't tell me they are bringing it back.

An entire generation has adulted without knowing that there was something called as Orkut.

I still love #orkut it was real Social Media Platform. I was there on the last day Sep 30 2014.

Scraps, Groups, Testimonials it was all fun and Genuine Friends.

Wish it comes back. pic.twitter.com/CfwebTwsAx

Meme templates also started picking up the pace on #Orkut

#orkut is the OG pic.twitter.com/x79KbRVMXy

me after watching #Orkut is in trend: pic.twitter.com/TrsCpoSdcR

While brands and influencers also joined in the Orkut feels with their messaging.

It's the blissful '00s, you wake up to "good morning" messages on your flip phone (don't use up all 100 SMSes yet). You put on your low-waist jeans and walk to tuitions while listening to "Hips Don't Lie" on your iPod.

We're currently taking aid from a pretty big list of democratic countries. I do not think Twitter and Facebook which are seen as vehicles and measures of democratic thought are going anywhere.

Section 79 gives digital media platforms the immunity against liability for posts that are uploaded on their networks, and for any involving third party information or data. The new IT Rules 2021 state that this immunity that is provided to all digital media companies will be withdrawn and that these platforms will evidently become a part of the legal proceedings should social media companies not comply with the new rules that have been doled out.

Sub-section 1 of section 79 of the IT Act says, “Notwithstanding anything contained in any law for the time being in force but subject to the provisions of sub-sections (2) and (3), an intermediary shall not be liable for any third-party information, data, or communication link made available or hosted by him.”

Based on all these rules and regulations, it is understood that social media companies may face grievance redressal and lose legal immunity for any legal proceedings in India which will hold them responsible for the content that gets uploaded on their platforms. This in no way states that there could be a ban applied for any non-compliance, hence, proving all rumours to be baseless.