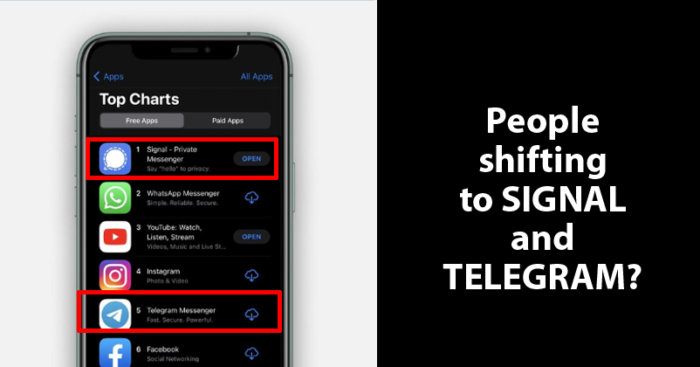 The year 2021 has just begun and it seems that all may not be well with the social media giants. WhatsApp and Facebook have been receiving a lot of flack recently for the latest privacy policy.

The new privacy policy indicates that Whatsapp may share a user’s data with Facebook. To make things difficult, according to WhatsApp’s new policy, users will not be able to send or receive messages after February 8, until they accept the updated terms and conditions. Following the news, many people have now decided to ditch the app altogether.

The apps that have now become pretty popular amongst the users are Telegram and Signal app. The attention towards the Signal app also surged after a simple tweet by now the richest man in the world, Elon Musk.

To make most of the sudden attention they are receiving, Signal app shared a tweet suggesting how to move their group chat on their app to Signal app. Though the tweet could have been merely suggestive, the Signal app did end the post with a dig at the recent development around WhatsApp.

A lot of people have been asking how to move their group chats from other apps to Signal, and Signal group links are a great way to get started. Drop a group link into your former chat app of choice like you're dropping the mic on the way out. pic.twitter.com/q49DeZufBG

The app’s popularity has surged so much so that it ranks number one in the app store which once was held by none other than WhatsApp itself. One of the users had shared a screenshot of the top chart and well, it says it all.

Signal is now more popular than whatsapp in India on app store. Looks like everyone is shifting now 😀.

In no time, Telegram has taken the second spot on the charts while WhatsApp is witnessing a downfall in its trend.

Whatsapp has definitely become an integral part of our day to day lives. From personal to business, there has been so much development on the app over the years. However, only time will tell if this year will mark an end to the lead that the app has enjoyed in all these years.