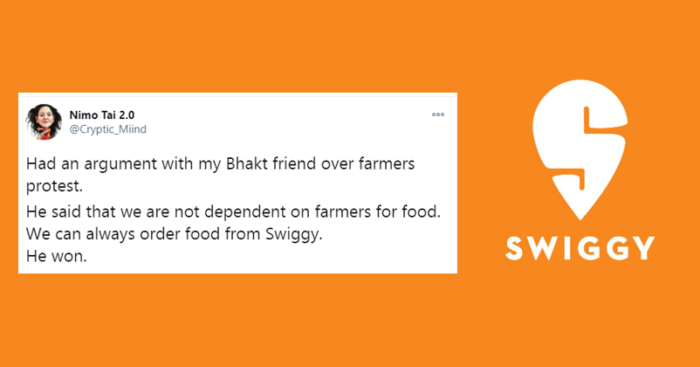 The last week of November had mixed emotions for all Indians. While there was a lot going on in the country, popular food delivery app, Swiggy, found itself in a bit of a flux. A parody account created for Nirmala Sitharam had a tweet that mentioned the recent Farmer’s Protest in Delhi. The thread had a convo between two friends who argued that they weren’t dependent on the farmers for their food. They can order from Swiggy instead. Swiggy’s reply to this tweet landed the company in trouble. Check this out.

Swiggy had taken a stand for the farmers, owing to the new Farmer’s Bill detailing that without the farmers, there would be no crops cultivated which would not enable anyone in the country to procure food. This is basic education covered during your school years, which Swiggy smartly phrased by saying that they cannot refund education. Unfortunately, trolls took it to heart and #BoycottSwiggy started trending.

This followed after several other reputed brands were trolled this year due to a comment, advertisement or more. These were the reactions of a few of the Twitter users.

Sad you can't refund your own education. You wanted to prove yourself woke… well you did it by your idiotic reply. Comment karne ke pehle thoda padh hi lete… #FarmerBill2020 ko @swiggy_in!

Some other users commented on the situation after observing a recent pattern with not just Swiggy, but other brands since the last few months.

Me :But you have already boycotted Zomato day's before 😅😂
#swiggy

Fairly confident half the bhakts didn’t even understand what was being said here and just jumped on the bandwagon and said chalo uninstall, but what else can be expected of them. #boycottswiggy https://t.co/7n7owf0LuY

As a brand who was brought into the conversation, a reply seems fit. However, some would argue that this could have been avoided had Swiggy never commented at all. Do you think Swiggy’s stance on this situation was required? Do you support their stance to offer a befitting reply to the meme account?