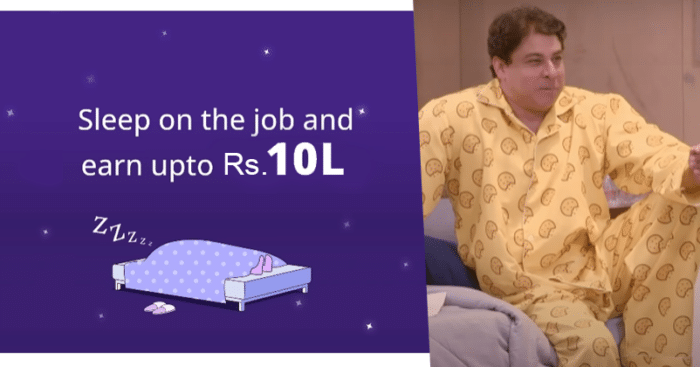 Imagine if you will, that you sleep on the job & get paid for it too! Wakefit made this dream come true with their Sleep Internship.

What is Wakefit’s Sleep Internship?

Wakefit’s Sleep Internship started in 2019 as a way to help people understand the importance of good sleep & its impact on their well-being. Today, it is a nationwide phenomenon inviting lakhs of applications each season. The premise is simple. Sleep for 9 hours a day for 100 consecutive days & earn up to INR 10 Lakhs.

The interns are selected on the basis of the applications received on https://wakefit.co/sleepintern. They are first selected at a city level after which shortlisted participants are chosen to represent their respective states in a national sleep face-off.

The interns are required to cultivate deep, uninterrupted sleep of 9 hours for 100 consecutive nights. They are armed with a state-of-the-art Wakefit mattress and a sophisticated sleep tracker. The interns have their sleep quality measured biometrically and quantified into Sleep Scores. The intern who sleeps the best & gets the highest sleep score becomes the Sleep Champion & creates history.

As a part of this program, the interns also get to participate in various sleep-related challenges. Integral to its scientific approach to sleep, Wakefit also facilitates counseling sessions with sleep experts, fitness experts, home decor specialists, and so on for interns.

All the finalists earn an assured stipend of INR 1 Lakh while the Sleep Champion – the intern who wins the finale, has a chance to earn upto INR 10 Lakhs for sleeping.

Decoding the Insight behind the Sleep Internship

In a world that worships productivity and glorifies hustle, it’s no surprise that sleep bears a heavy brunt. With “You Snooze, You Lose” as the nation’s guiding principle, a love for sleeping is often seen as the hallmark of the lazy and the unambitious. But the ability to prioritize work over sleep, well that’s bestowed as a badge of honor.

While the major consensus is to demonize sleep, research findings are quite contradictory.

Several studies show that good sleep enhances productivity and performance. Poor sleep takes a toll on memory, concentration, and decision-making. Sleepless nights in a row can lead to severe health conditions. This should be enough to establish what a serious business sleep is, but sadly, that is not the case.

Wakefit’s Great Indian Sleep Scorecard study suggests that there has been a 57% increase in Indians sacrificing sleep by staying up late doom scrolling. About 40% of the youngsters in the study did not have a dedicated sleep space for themselves.
These insights inspired Wakefit to create an internship that spreads awareness about the need for quality sleep. Through the sleep internship, Wakefit endeavors to help people cultivate deep, healthy sleep and give them an opportunity to earn a handsome stipend by prioritizing their slumber.

The first season of the Sleep Internship made waves not just in India, but throughout the world. Wakefit received 1.7 lakh applications from India & 30 other countries for this ‘dream job’. 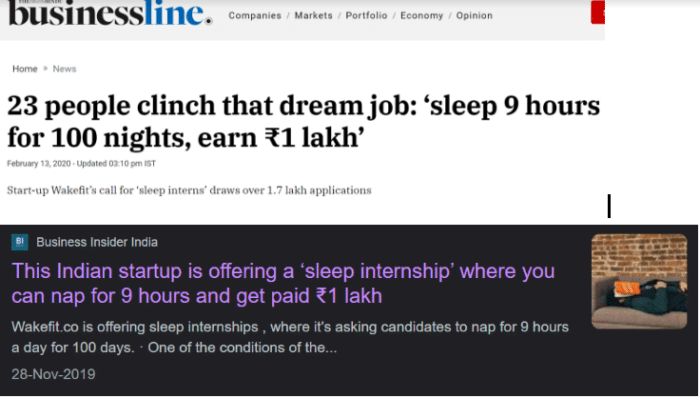 The inaugural batch consisted of 23 Sleep Interns – 21 from India, 1 from Slovakia, and 1 from the United States. Wakefit’s Sleep Internship was also among the most applied to jobs on Linkedin. All the interns earned a stipend of INR 1 Lakh.

The second season only got bigger with over 5.5 lakh applications. Wakefit raised the stakes 10 times. The selected interns not only got Rs. 1L as assured stipend but also a chance to maximize their earnings upto INR 10 Lakhs and get crowned India’s Sleep Champion.

15 Sleep Interns made it to the final round with Kolkata’s Triparna Chakroborty winning  the title of India’s first Sleep Champion & bagging a prize money worth INR 5 Lakhs with a sleep score of 95%. 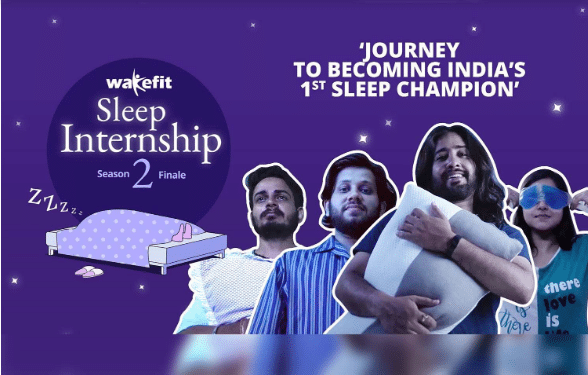 Two seasons down, with Season 3, the stakes remain high as ever, with upto 10 Lakhs up for grabs. 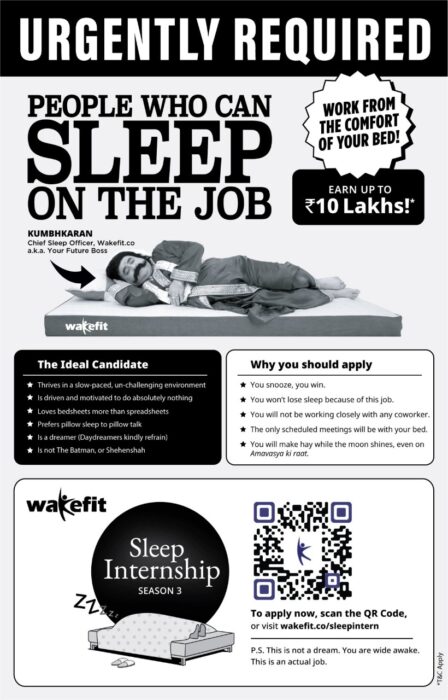 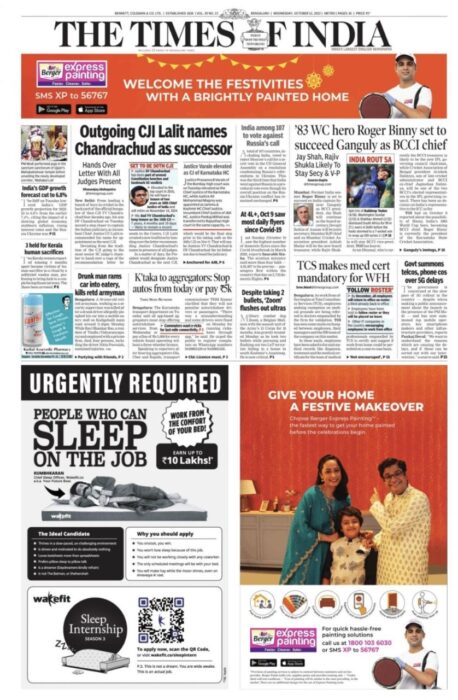 Wakefit is pushing the envelope to get even more registrations in this round with full blown 360-degree marketing. The campaign ranges from quirky print ads & social media content to  mentions by famous influencers & youtubers, such as Aiyyo Shraddha, Satish Ray as well as India’s national crush & Wakefit’s very own Brand Ambassador – Rashmika Mandanna. 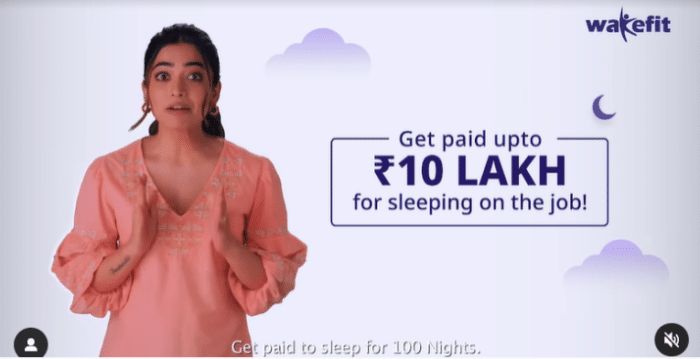 The brand has seen more than 1 million unique page views so far with the number growing exponentially every day.

So how does this help the brand?

“Why should we choose you? Wakefit” and “Wakefit 10 lakh job” are some of the keywords that dominate the Google search panel each time Wakefit launches its ‘Sleep Internship’ campaign. Normally, branded searches at this scale have a lot of marketing money behind them.

But Wakefit manages to get the entire nation’s attention organically. Sleep Internship has helped garner massive interest for Wakefit with each successive season. This has a significant positive impact on the overall brand health over the years with sharp increases in mind metrics, such as TOMA (Top of mind Awareness). The brand sees a 100-150% increase in direct website traffic as well as a 150% increase in the number of people searching the brand on Google.
With entries coming from the top cities of India including Mumbai, Delhi-NCR, Pune, Bangalore, Hyderabad, Chennai and Kolkata, the branded property ignites a lot of positive conversations & engagement throughout the country. Thus helping Wakefit realize its vision of becoming India’s most loved home solutions brand.
With the 3rd Season LIVE now and an ever increasing number of applications on https://wakefit.co/sleepintern, we’re all waiting to see India’s next Sleep Champion. Are you too? Let us know what you think.