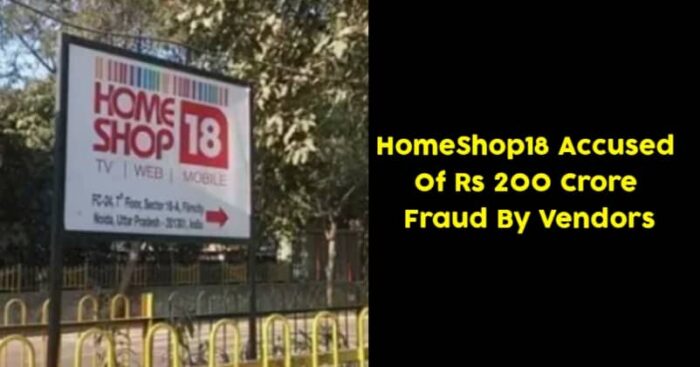 Homeshop18 Vendors Association has accused the teleshopping marketplace of committing an INR 150- 200 Cr fraud. Homeshop18 is accused of one of the biggest fraud allegations in India.

The association, at a press conference on September 27, alleged that the company illegally collected the amount from consumers on behalf of the sellers by acting as an intermediary. The company as supposed to transfer this money to the vendors.

The firm has not paid about Rs 200 crore collected money for the products sold to customers on behalf of 150 sellers, according to HomeShop18 Vendors Association President Himanshu Khatter. As reported by Entrackr, HomeShop 18 failed to wire the money after deducting its average commission of 30% to sellers.

From March onwards, the default in payment started. HomeShop18‘s CFO later assured the vendors association saying that they were in talks with the Reliance officials for infusion of funds into the company.

Vendors where shocked when they realized that Network18 was selling HomeShop18 to a real estate entity Skyblue Buildwell.

The association has alleged that Skyblue is a shell company as the registrar of company filings of FY18 shows that Skyblue has a total net worth of INR 7.57 Lakh, with no employee expenses. At the same time, HomeShop18 is valued at INR 305 Cr, as of March 2018.

It was shocking to see a smaller firm acquire a company that has its value worth over hundreds of crore. Something was surely not right.

There is no information on approval from MCA yet and whether operational creditors were informed about the development. The matter remains to be investigated.

The development comes at a time when the Ministry of Consumer Affairs is working on e-commerce guidelines to prevent fraud, unfair trade practices and protecting the legitimate rights and interests of consumers.