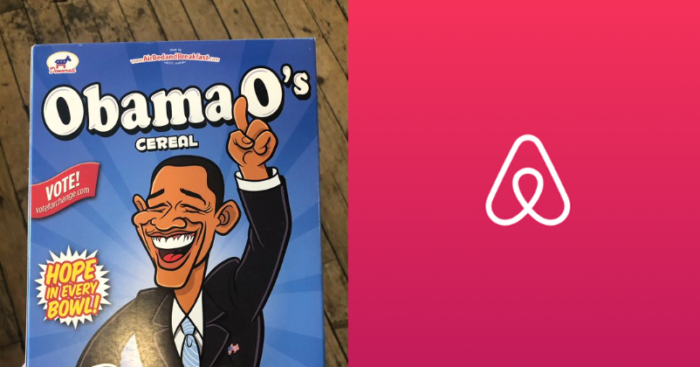 Airbnb has become one of the most leading names in the hospitality industry. However, the current situation around the coronavirus pandemic has affected the industry adversely.

Keeping this in mind, Airbnb has recently unveiled a new initiative called ‘Go Near’ with an aim to promote domestic travel that will help in enhancing the local economic growth. The company surely knows how to maintain its stand in the local market.

Today we bring you an interesting story about the hospitality giant that was recently shared by the CEO Brian Chesky himself on Twitter.

We funded Airbnb by selling these https://t.co/qRbvgwLqqm

The post shows a picture of a cereal box with a cartoon of Barck Obama on it and the caption read ‘ We funded Airbnb by selling these’. So what is the story behind the cereal box?

Airbnb was founded in 2008 by Brian Chesky and co-founders Joe Gebbia and Nathan Blecharczyk in San Fransisco. What started as a small project was able to attract a lot of users and the team realized that they needed substantial funding and that too fast.

The team came up with a very innovative and opportunistic idea to generate money. That was the time when Barack Obama was running for the president and his popularity was shooting the roofs. Chesky & Gebbia came up with a plan to sell a side product that will help them get the funding they so badly needed. That is when they started selling Obama’s O and Cap’n McCain’s themed cereals.

The team built almost 1000 boxes from scratch and got them printed with political cartoons and had them filled with cereals. All this was done in Chesky’s apartment and it was nothing less than an indoor craft event. The idea was a success and helped them to earn a whopping $30,000.

The story of the Obama Cereals went viral with the press and media and Airbnb got the limelight they needed. The cereal boxes story also landed them funding of $20,000 from Y Combinator‘s Paul Graham who was much impressed by the team’s creative approach to funding their business.

Today the company was last privately valued at $31 billion and no longer has the need to sell the cereal boxes for their fundings. But the story sure serves as an inspiration to budding entrepreneurs who can learn a thing or two from the Airbnb co-founders.