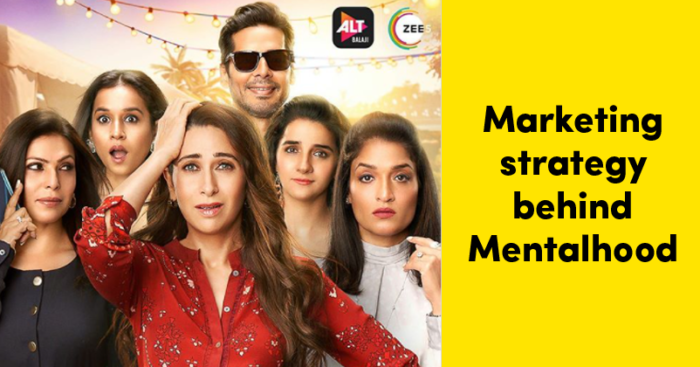 ALTBalaji recently announced its new web-series ‘Mentalhood‘ starring Karishma Kapoor which takes you on a crazy ride of motherhood. In the series, Karishma plays the lead as one of six “supermoms”.

ALTBalaji & Zee5 have made sure that the marketing of the series is full-blown. The social media platforms have been buzzing with all the promotional posts. Production has made sure to leave people excited about the upcoming show. Let’s take a look at the marketing timeline of ‘Motherhood’.

The poster introducing the entire star cast was shared by Ekta Kapoor on her Instagram handle. Ekta was excited to announce the show and called it ‘The MOTHER of all shows !’. The poster was basically a shoutout to all the mental moms out there.

On d auspicious occasion of MAHASHIVRATRI we kickstart d campaign of a show that is inclusive emotional n totally relatable ! The MOTHER of all shows ! To all the mental moms out there…I feel u …I know u ..I get u…n now I AM YOU ! -mentalmom

Earlier in February, ALTBalaji shared a video introducing all the 6 moms in their avatars.

Ekta Kapoor gave an emotional & personal touch to the show’s marketing when she posted a video where she talked about what went in the making and what encouraged her to make the show. Ekta even dedicated the series to her mother and talked about how much she has done for her.

N to my son who will do a befitting payback🤣( if I look like I’m sleep walking thru this video it’s because I have not inherited any acting genes but I mean every word 😘😆) Hey Ma, I dedicate #Mentalhood to you ❤ #ThankYouMom❤ @shobha9168; For all the endless love and scarifies you have made not only for Tushar and me, but also Lakshya and Ravie ❤ You’re a #SuperWoman #SuperMom #SuperGrandMom!!! So Mommy… Presenting to you the MAA of all shows, #Mentalhood jahan taking care of the kids is not a chota mota task! 😉 #Mentalhood, streaming 11th March, on #ALTBalaji It’s your time to thank your moms for being the #SuperMoms they are 🥰

The trailer launch was a star-studded event that took place earlier this year and received a lot of coverage.

Meira Sharma’s character is the lead on the show and ALTBalaji was quick to acquaint the viewers with her. Take a look at how Karishma Kapoor described her role and the mother Meira Sharma is.

An online contest was conducted to bring forth the stories of the real super moms across the country. The platform partnered with digital platforms like Mompresso, Babychakra, and other mommy bloggers to leverage the entire community.

Many moms took part in the contest and the top 10 moms got a chance to attend the shows screening with the stars.

The shows screening was a starry affair and was attended by many celebrities of the industry including Kareena Kapoor. She even shared a picture of her and her mom with Lolo attending the screening. The post was retweeted on the ALTBalaji’s instagram handle spreading the buzz furthermore.

Wonder women… My life in colour 🦋🦋🦋

ALTBalaji shared an interesting quiz on their Instagram handle where people could find out exactly which mom they are.

Karishma Kapoor even came on Tik Tok to promote her shows and also collaborated with many famous TikTok influencers like Faizal Siddiqui & Sana Khan.

A Jio bot was developed, where any user could interact with the bot in a live environment and get answers to frequently asked questions. It helped the platform reach 20 Mn users and got over 23% of the audience to engage and interact with them.

The show makers shared an interesting video as a part of their ad campaign wherein the star cast shared witty mommy hacks.

Karishma Kapoor’s Mentalhood had all the support it needed. Bollywood’s fav Kareen Kapoor Khan shared a video of her and her girl gang crashing the shoot.

How Did It Go?

Well, the end results of this long-awaited marketing road proved favorable for the show makers. After its launch on the OTT platform, the show received a lot of positive reviews and was said to be a success. The makers posted a thank you post on Instagram sharing the success they have achieved.