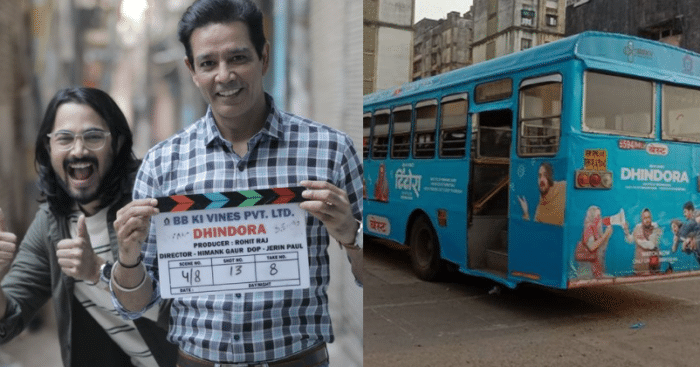 The Indian social media industry is full of influencers of all ages. While some are into travel blogging others are the fashionistas worth inspiring.

The stream has become so popular that well-established celebrities who have made a name as actors and cricketers amongst others now have a strong presence on social media.

But the most common phenomenon we have seen is that people get fame overnight thanks to these platforms.

The fan following of Youtube influencers and content creators is much higher as compared to any other. One such content creator that has become a brand in himself with his sheer hard work is Bhuvan Bam.

He started his Youtube career with his channel BB ki Vines. A few years down the line and he has made a name for himself amongst international content creators.

Bhuvan Bam is now all set to take a step ahead in his career. India’s first fictional YouTube Original, Dhindora, starring Bhuvan Bam in his BB Ki Vines avatars.

To make the show a success, the makers are ensuring that it gets the marketing like any other anticipated show on OTT platforms.

Bhuvan Bam is the creator of India’s first fictional YouTube Original. With this, Bam has ensured to participate all hands down to promote his show. He announced the poster of his up-and-coming web series through his personal social media channels.

The production house introduced the cameos of some of the most popular faces along with other thanks and honors were given to the entire production team.

What can be the best way to market a new show if not with the meme fest. Memes have become a way of living. ‘Dhindora’ team for quick to jump in on the trend and market the show right.

Mumbai buses were painted blue and the Dhindora was heard and seen all over the town with this marketing approach.

From OTT to TV: The Bigg Entry

Bhuvan Bam was seen promoting his show on one of the most popular reality shows on television in India, Bigg Boss. Standing beside Salman Khan, Bhuvan Bam was visibly ecstatic. He surely is the first social media influencer to have such a platform to promote his show.

Tanmay Bhatt, Carry Minati, and all the others from Youtube and Dhindora team were seen in the BTS shared by Tanmay Bhatt himself. The fun clip gave us all a glimpse of the fun and exciting show that Dhindora is planning to be.