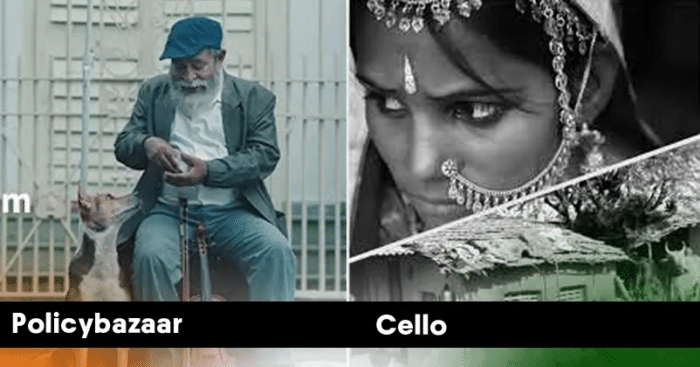 The theme revolving around Independence Day celebrations this year is ‘Nation First, Always First’ which makes an attempt at honouring the freedom fighters that our country have borne. This 75th Independence Day marks India’s progress in battling the COVID-19 Pandemic which has deeply impacted all sections of society, across borders and has united all in the strive to reduce the pain that the pandemic has caused everyone.

Here are our picks of Brand Ad Campaigns this year that have aced their messaging as India Celebrates its Independence.

1. BIC Cello which shares stories of 3 individuals through the #AzadiJoKalamUthaKaiMile campaign.

2. Mother Dairy’s Ad Campaign which features Rajkumar Rao sweeps us with emotion while talking about the sense of responsibility that is attached to freedom.

3. Godrej Group released a digital campaign that revolves around the theme of #FreedomIs and expresses what the youth of the country expects and showcases their belief in what freedom means to them.

4. BookMyShow’s BookASmile is a charity initiative in collaboration with YUWA NGO that is an attempt at encouraging girls to venture out in the field of sports.

6. Policybazaar rolled out a campaign titled #AapkaAsliSupportSystem which celebrates India’s 75th Independence in the most unique manner, highlighting how life is much more beautiful when we support each other.

7. Uber India shows their support in how they are committed to supporting the community during the pandemic through a heartfelt ad campaign.

8. CashKaro, in collaboration with celebrities like Ali Fazal, Sunil Grover, and Nidhi Agarwal, CashKaro launched a campaign #HumIndianHain which highlights how every Indian seeks value for money and that the company stands for just the same.

9. Candere rolled out a #FreedomSale which celebrates the spirit of the 75th Independence Day in the country.