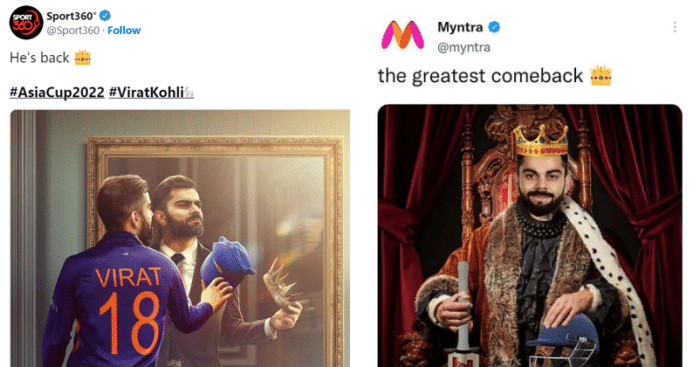 For the love of cricket, the nation has been recently hooked to the ongoing Asia Cup 2022. The tournament started off well for India, but sadly, the men in blue are out of the race by Pakistan after it beat Afghanistan by one wicket in a Super Four match in Sharjah last Wednesday.

While this brought on a lot of flack on the Indian team, especially on the captain Rohit Sharma for his choice of players.

Despite the ongoing gloom, there has been a recent event that has made us all scream in joy. The former Indian skipper Virat Kohli made headlines for his 71st century against Afghanistan in the Asia Cup Super 4 match in Dubai.

There have been many speculations about his performance. But once he scored an astonishing 122 of 61 with which India scored a total of 212/2.

To celebrate his achievement, the entire nation came forward and shared their joy all over social media. Not just people, there were many brands that jumped in on the festive wagon that the nation witnessed soon after.

This is how the brands reacted to Kohli’s 71 century.