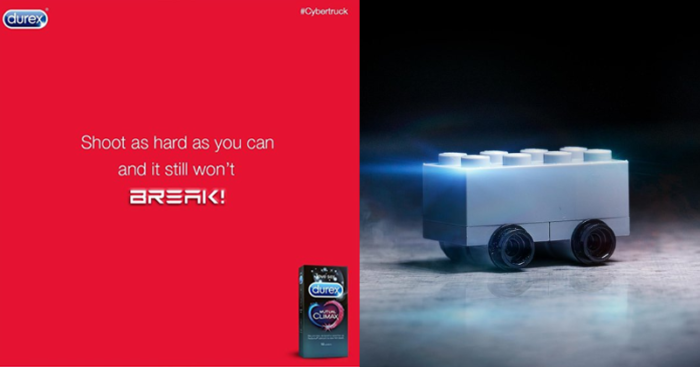 Recently, Elon Musk‘s Tesla was in news for all the good reasons. Musk did a demo launch of Tesla‘s new Cybertruck recently which did not go exactly as planned. The Cybertruck‘s “bulletproof” window shattered during the demonstration which was meant to show how strong the glass was.

The launch of Tesla’s Cybertruck attracted worldwide headlines when Musk claimed it was “bulletproof” against a 9mm handgun at a promotional event in Los Angeles last Thursday. But when Tesla’s chief designer Franz Von Holzhausen threw a metal ball at two of its windows, they both shattered.

The incidence did not go unnoticed for obvious reasons. People shared their reactions on Twitter and other social media handles and trolled the incidence mercilessly.

Many brands took to Twitter to mock the incidence as well.

Toy company Lego tweeted on Wednesday with a picture of a Lego on wheels with a caption, “The evolution of the truck is here. Guaranteed shatterproof.”

The evolution of the truck is here. Guaranteed shatterproof 😬 pic.twitter.com/RocTEkzzwI

This post of Lego has been retweeted more than 25,000 times.

Pepsi, however, did its own version of trolling. shortly after Cybertruck’s launch, the brand pictured a ball of paper hitting the Pepsi can with the caption, “Demo day.”

Condom brand Durex also tried making fun of Tesla. Durex uploaded a picture on social media that said, “Shoot as hard as you can and it still won’t break!” The caption read, “We could showcase it to you, but let’s rather not! #CyberTruck.”

We could showcase it to you, but let's rather not! 😋 #CyberTruck . To buy, click the link in bio.

The Dubai Police tweeted a picture of Cybertruck with its own branding on Tuesday.

Production of the Cybertruck begins in 2021 and Musk has claimed on Twitter to have had 250,000 pre-orders. People pay $100 to register for an order of the Cybertruck, but they are not considered official deposits for the vehicle, which has a $39,900 starting price. Keeping the trolling apart, Tesla gained a lot of positive marketing for its Cybertruck.