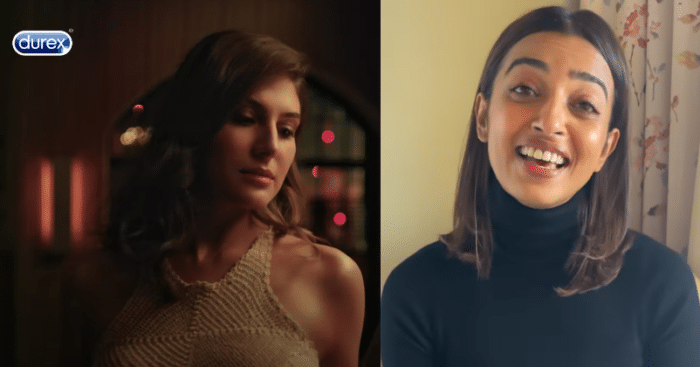 Durex’s new product- extra thin flavored condoms, focusses on feeling intimate with your partner, rather than just setting the mood. They are available in three flavors- Chocolate, Strawberry ad Bubblegum. And to launch their product, Durex adopted a three-phase campaign.

First, Durex launched a brand creative depicting the topic #EndBedroomDistancing rather well. It created a buzz around the concept of #EndBedroomDistancing, by getting celebrities like Prateik Babbar, Badshah and Harshvardhan Rane talking about this idea, which may exist but is hardly discussed.

Then, in order to garner attention and sustain the interest generated by the creative, the company adopted an influencer-integrated strategy. Celebrities like rapper Badshah, Radhika Apte, Ritabhari Chakraborthy, Prince Narula were seen promoting the product through social media.

Lastly, there was a launch of a 20 second commercial featuring Elnaaz Norouzi and Prateik Babbar to convey the new offering’s standout characteristics, using imagery. The TVC, developed by Havas Creative (India) and directed by Lloyd Baptista, has been amplified on various social media handles of celebrities, part of the campaign

Dilen Gandhi Regional Marketing Director, South Asia – Health & Nutrition, Reckitt feels that there has hardly been focus over innovations in the product, or even in addressing intimacy issues. Though there are a lot of options to choose with respect to flavours, intimacy issues of consumers still need to be addressed. This product is a global first launch for Durex focused on bringing in the much-needed intimacy in the bedroom. And hence, by encouraging dialogue among consumers, they are attempting to help break imagination boundaries through innovation.
Durex collaborated with 12 influencers and celebrities to create chatter around its campaign following a simple filtering process: how many followers does the celebrity command; how well can their image be used to associate with the brand and how well will they be able to convey the intended message to the consumers. The brand knows exactly how to reach out to their audience in the quirkiest ways possible and this influencer marketing campaign has gotten everyone abuzz.