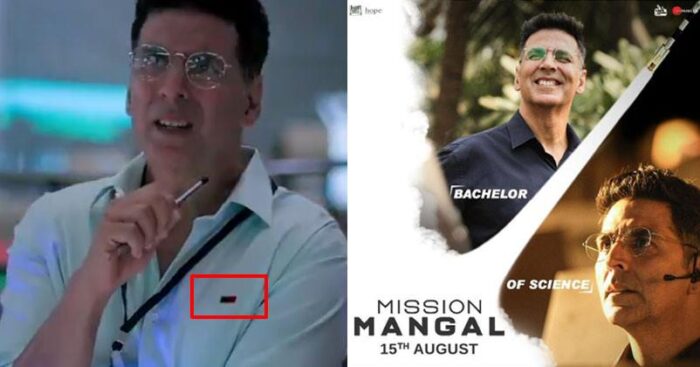 Mission Mangal, starring Akshay Kumar, Vidya Balan, Taapsee Panu, and Sonakshi Sinha, has hit the screens across India on Independence Day. The story of the film is based on ISRO’s Mars mission.

The movie has received a lot of attention from the moment its trailer came out. It is also seen that the movie was backed with a lot of marketing strategies from the beginning.

Movies have seen a surge in marketing strategies in the last couple of years. After the movie has completed its production stage and goes through all the essential technical procedures, comes the marketing stage. It is essential that the producers keep aside a good amount of budget for it so that the film does well on the box office.

Mission Mangal particularly took the last step pretty seriously. It tied up with a number of brands as part of its marketing strategy, even before its release.

And in the age of social media, these collaborations were all over Twitter and other online channels, making it visible for everyone to see the hype. Brands like Peter England, Paytm, Ixigo, Kajaria Ceramics, Sonata Watches, & Fox Star were among the many collaborating and promoting the movie.

Watch the Mission Mangal video. Tell us how many Peter England shirts Akshay Kumar is wearing in the video and stand a chance to win tickets to Mission Mangal.#ContestAlert #MissionMangalCollection #StyledByPeterEngland #PEStylesMissionMangal #MissionMangalOnAug15 #FoxStarHindi pic.twitter.com/IE55m6M1rQ

#Contest : Why according to you Mission Mangal is an important film for Indian cinema?
Answer the question and get a chance to meet the movie stars! #MissionMangalOnPaytm https://t.co/95i2Uuf6qs pic.twitter.com/b9bKBStBHI

Watch #MissionMangal in association with Kajaria, covering the story of our unsung heroes who took India to new heights. pic.twitter.com/DchXIp0hI5

Har mushkil hai asaan, Sonata ke saath!
Saluting the brilliant women behind "Mission Mangal", they are an inspiration to us all with their confidence and perseverance.
Explore the collection here https://t.co/feXssIMnqY#MissionMangal #KhudParYakeen #SonataWithMissionMangal pic.twitter.com/NCwpv5KHgI

While the brands were playing their part, ISRO took notice and also hailed the team of the movie on Twitter. Akshay Kumar replied to ISRO thanking the organization for their wishes.

Mission accomplished! Thank you so much for giving us such an inspiring story to tell, it’s been an absolute honour to have had this opportunity and I can say this on behalf of all the actors & team of #MissionMangal https://t.co/UsDlt88I5R

As #ISRO prepares for landmark launch of #Chandrayaan2, #TeamISRO wishes @akshaykumar all the best for #MissionMangal and all his future endeavour

Thank you so much and wishing best of luck once again to #TeamISRO for #Chandrayaan2 https://t.co/nC9cYvWzeU

It is safe to say that the team was able to create the right amount of buzz on the social media which helped them to get the desired opening at the release date. From collaborating with the brands to attending talk shows on television as well as radio, Mission Mangal has left no stone unturned.

The Movie even became subject to the biggest marketing strategy of the decade, The Meme Culture.

#MissionMangalTrailer #MissionMangal
When you sneak out of the friendzone and make her your gf pic.twitter.com/Knkvu455IV