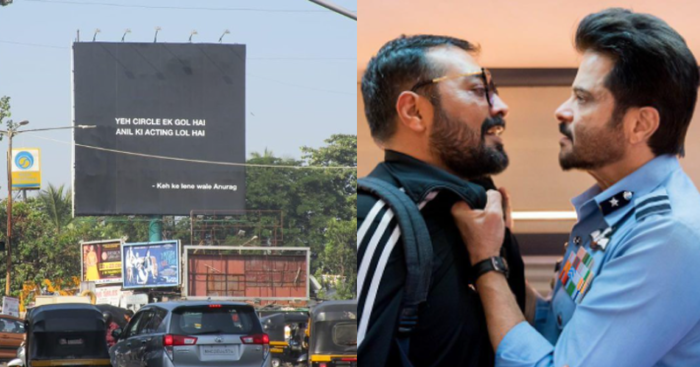 AK vs AK was released on Netflix, right before Christmas. To build up the hype of the movie, before and even after its release, Netflix did a little extra, just like actors Anil Kapoor and Anurag Kashyap enjoy doing, in the movie, and in real life! The insane hatred generated between the two was thankfully only in the movies, however, they gave a glimpse of the same to their fans in the real world as well, where it was too good to be false!

The start of their reel life feud began on Twitter, where users mistook both the celebrities to actually be arguing with each other – one about being a legendary actor and the other being a successful director. Whose side were you on?

We’ll need a tub of popcorn for this one!

What a reply, Sir! At that time, Kashyap was definitely a good director, but his shoot to fame had just begun.

The closest you have come to an Oscar is watching Slumdog Millionaire win Oscars on TV. #TumseNaHoPayega https://t.co/sZzCDhVvAA pic.twitter.com/YhZHKrEFfO

And what a great burn, served by Anurag Kashyap! We definitely felt this one.

Says the k-k-k-ing of hand-me-down films. Weren’t you the second choice for this film also? https://t.co/7pfdatvIGr

Anil Kapoor further talked about his golden career of being in the film industry and blessing it with a number of hit movies. Kashyap’s reply? Way to go adding fuel to the fire!

What a low blow, yet again!

Anil Sir may have a point. What do you think?

The duo later revealed that they had been arguing on Twitter only for the sake of their film AK vs AK.

It was hilarious to see both actors share hoardings of their upcoming film, filled with insults about the other. Now that’s the way you have a real argument!

Who are you going to support again?

Finally! The trailer was released and we loved every bit of it! Was it all an act or did Sonam Kapoor actually get kidnapped? Retaining their original identities, it was hard to understand what was going on! Everything seems very real, and we bet it was! Only till you watch the film, you will understand what the story actually is and how it paints both our favorite heroes in different lights.

Watch the trailer if you havem’t already!

Moreover, the poster was also very well picturized! We love how both of them look so similar. Two sides of the same AK, indeed!

When it comes to original content, Netflix is surely the King! They got both the heroes to create interesting videos for the promotion and also got actor Jackie Shroff to review the movie!

Directed by Vikramaditya Motwane, this movie should not be missed by anyone who wants to know more about these Bollywood celebs, their lives, and how popularity can be a major factor to create arguments. This story will keep you in your seat, right till the end!