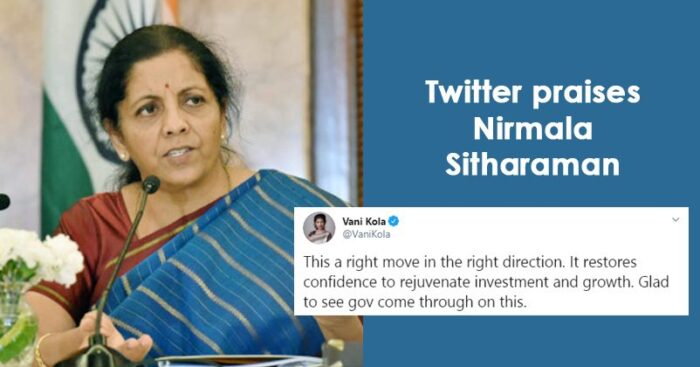 India‘s Finance minister Nirmala Sitharaman has been a topic of discussion recently. People were always skeptical of her position. But recently people have seen a different face of hers.

The decisions she has taken recently for the betterment for the country’s economic condition is remarkable.

On 20 Sep’19, Sitharaman announced a broad-ranging set of reforms for which she has been hailed by India’s corporate honchos. She has reduced the effective corporate tax rate from 30% to 25%, which put India at par with more developed Indian peers, such as Singapore.

The government also announced that there would be no tax on buy-backs that were announced by listed companies before 5th July. The stock markets took notice and rose nearly 5 percent, which is the highest single-day rise in years.

Business leaders from across the sectors came forward and showed their appreciation for her work on Twitter. Biocoin founder Kiran Mazumdar Shaw, who’s often a vocal critic of the Modi government, said it was a great move. “My hats off to Finance Minister Nirmala Sitharaman for this bold but most needed move,” she said, adding that it would spur growth.

Corporate Tax Rate Cut From 30% To 25.2% To Spur Growth- this is a great move which will firmly revive growth n investment. My hats off to FM ⁦@nsitharaman⁩ for this bold but most needed move. https://t.co/yhvJ9IcMmm

Financial markets journalists were just as impressed. Darshan Mehta, who works for Bloomberg Quint, said that the financial community would be telling their kids about the event years from now, about how their country had changed.

All of us who saw what happened today in markets will be telling this to their kids years from now….how India changed @sensexbaba

Uday Kotak, the CEO of Kotak Mahindra Bank, called it a “big bang” move. “It signals that our government is committed to economic growth and supports legitimate tax abiding companies. A bold, progressive step forward,” he said.

Snapdeal founder Kunal Bahl said it was an “incredible” announcement that would deliver a great boost to the Indian economy.

Incredible announcement which should deliver a great boost to the Indian economy. I am confident that the startup sector will also benefit tremendously with increased spending and investments that this will precipitate. @narendramodi @nsitharaman 🇮🇳 https://t.co/b5E8j5HHuh

This a right move in the right direction. It restores confidence to rejuvenate investment and growth. Glad to see gov come through on this. Laudable @nsitharaman, @PMOIndia https://t.co/okN3atyzPN

Investor Vani Kola said it was a laudable move, that would restore confidence to rejuvenate investment and growth.