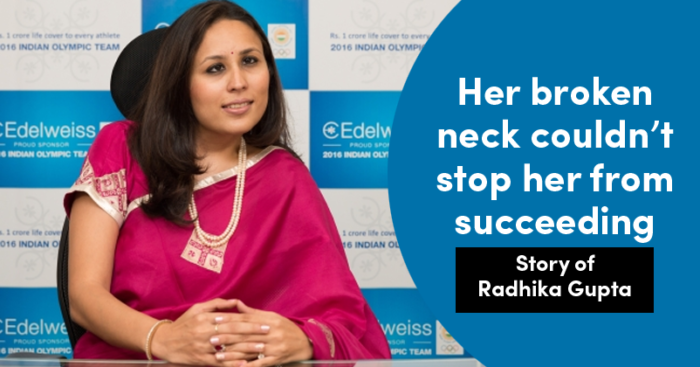 Over the years, Women CEOs have become a subject for inspiration for one & all. In a ‘Man’s World’, to have a woman running one of the leading organizations, is nothing but a story of struggle, hard work & success.

Today we bring you a story of one such CEO, who despite her challenges, has made her place in the industry and much more. Radhika Gupta, Edelweiss CEO, entered the industry with a broken neck but it didn’t hold her back. The birth complication left Gupta’s neck with a permanent tilt. At 36, she has already set up India’s first domestic hedge fund and become the country’s only female head of a major asset manager. Born in Pakistan, where her Indian diplomat father was posted, Gupta spent her childhood wherever he was serving at the time.

From Nigeria to the United States, Radhika has had a chance to acquaint herself with multiple languages & cultures. This added up to her personality and helped her be the person she is now.

Initially, Radhika wasn’t very confident. She was self-conscious about her neck, but over the time she has learned to accept it as part of what makes her unique.

Radhika did her studies from the University of Pennsylvania. Despite being a top honors student, she was facing rejections during her placement interviews by consulting firms. But things took a turn and one opportunity came her way when she interviewed for McKinsey & Co. partner.

The game is known for its older fans, but Gupta had taken it up when she was 12 at the insistence of her parents. She and the partner bonded over their shared hobby, and she got the job.

After 1 1/2 years at the consulting company, Gupta left to join AQR Capital Management, the $186 billion investment firm co-founded by Cliff Asness. But just as the global financial crisis was unfolding, Gupta felt an urge to start out on her own.

The Begining of the Investment Startup

In 2009, she, her husband Nalin Moniz and a colleague from AQR decided to go back to India to start Forefront Capital Management, with the princely sum of 2.5 million rupees ($34,000). They focused on alternative investments, a new phenomenon in India at the time. In the process, they set up the country’s first domestic-registered hedge fund.

In 2014 they sold the firm to Edelweiss Financial Services, with Gupta taking a post at the company and going on to become CEO of Edelweiss Asset Management in February 2017. Since then, she’s built assets under management to ₹30,000 crores, in businesses including mutual funds, alternative investments, and portfolio management services. That’s up from about ₹ 8000 crores when she took over.

Steps Taken For Success Of Edelweiss

When the government chose Edelweiss to manage its first corporate debt ETF, beating four larger players. Gupta said she made 50 trips to New Delhi since getting the mandate in January 2019 to speak with government officials, index providers and state-run borrowers to get the product design right.

The ETF collected more than 120 billion rupees at launch, 1.8 times the base subscription, with about 55,000 retail buyers. It listed on Jan. 2 and has since grown in size. The expense ratio of 0.0005% makes it one of the world’s least costly funds of this type. Finance Minister Nirmala Sitharaman announced plans for a second ETF in the budget, this time comprising government debt.