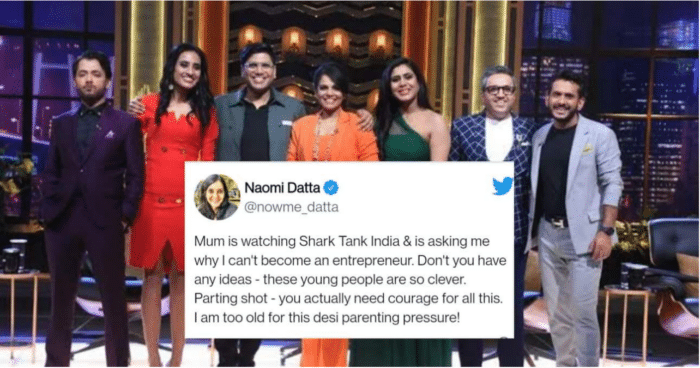 The first season of Shark Tank India is coming to an end. It is safe to say that this season was a complete success. It created a lot of buzz on social media and truly inspired the youth of the nation to become an entrepreneur.

It was not just the youth, but the entire family would come together in unison to watch the show. And later, have interesting dinner table conversations as well.

It has changed the perspective of many Indian parents and helped them understand the latest techs and terminology that is used in the business world today.

People took up to social media to express how their family members were appreciating the new wave of investment and startup that Shark Tank India has highlighted.

Mum is watching Shark Tank India & is asking me why I can’t become an entrepreneur. Don’t you have any ideas – these young people are so clever.
Parting shot – you actually need courage for all this.
I am too old for this desi parenting pressure!

My uncle just watched Shark Tank India and told this to my 20 year old cousin:

I have not seen single episode of Shark Tank India. But definitely this one show will make so many parents positive about entrepreneurship, so many ppl will learn negotiation,many will trust n believe Indian innovation. Just wait a few years for success stories to come.

A loooong but a good thoughts. Always been a Shark Tank fan and the Indian version is going good and rightly said it’s been watched by family and discussed too. Infusing a sense and importance of entrepreneurship among the youth and parents.

Our office building watchman was watching Shark Tank India today and when I stood by him to watch, he asked me if one can really come up with ideas, start small businesses, then raise crores of INR. When I said “Yes, Ofcourse”, his eyes lit up. Super job Shark Tank India! 🚀