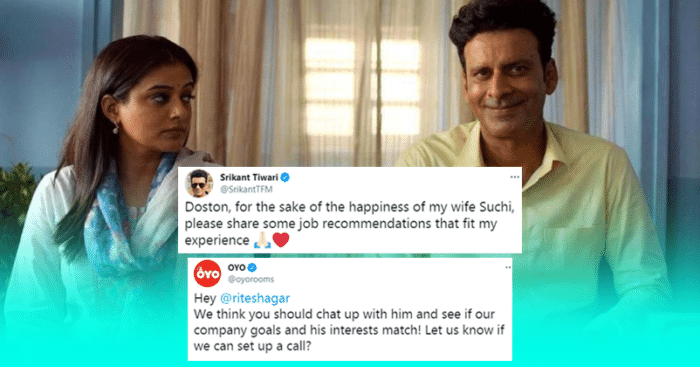 With the release of the new season of ‘The Family Man’ on Amazon Prime Video soon coming up, Srikant Tiwari played by the revered Manoj Bajpayee has decided to play the ideal family man and applied for jobs. This has rendered him a position to be interviewed by the leading CEO’s of startups and enterprises.

What started off as a tweet for the digital campaign, soon led the Family Man to scout job recommendations, pitch his previous work and showcase his skills and expertise that match the profile for which he is applying.

Doston, for the sake of the happiness of my wife Suchi, please share some job recommendations that fit my experience 🙏🏻❤️

Under the campaign name of #TheFamilyManJobHunt, Amazon Prime Video has led this job hunt for our Srikant Tiwari. With companies getting creative in approaching Srikant for an interview at their enterprise, quite a few were interested in recruiting him for positions open at their firms.

Hi @SrikantTFM, our platform will find the best jobs suitable for you, perfect for your experience and support you till the #Tandav ends. Meanwhile you can build a parallel income with our refer & earn feature. 1 crore worth of Referral Bounty awaits. Each of us is #TheFamilyMan.

Hey @riteshagar
We think you should chat up with him and see if our company goals and his interests match! Let us know if we can set up a call?

Consider it Dun @srikantTFM. We’ve blocked your calendar for an interview with @kabeersays at 11.30AM tomorrow. Don’Tiwari, we’ve got you covered. See you tomorrow!⚡️😇#TheFamilyManJobHunt pic.twitter.com/alB9ROtnGR

Traveller ✅
Go-getter ✅
Lived out of the suitcase ✅
Man of all excuses ✅
Work-life balancer 😉@SrikantTFM, to bag this legit opportunity, we urge you to share a quirky CV following this application process: https://t.co/YeMAtxdeJD#TravellersWanted #TheFamilyManJobHunt

CEO’s also participated in the campaign by tweeting in their time slots for the interview with our Family Man which started picking up and further built on the response.

That would be fantastic! @SrikantTFM would be a great value addition to our team. Also,@kkagetsu would you join us for the same. We have already blocked the calendar. #saathipads pic.twitter.com/O0fS4yMSl2

Eager to hear all your thoughts on how we can work together @SrikantTFM. See you at 10 am tomorrow pic.twitter.com/kXOem46pvz

Haha! Let's do this, I say :))@SrikantTFM – would love to explore a role with you. Tomorrow 1:00 pm? Have sent you an invite 🙂 pic.twitter.com/ABMDdRQKI3

What followed was a series of virtual interviews with Srikant wherein he depicts his skillset that has been refined as a counter-terrorist task force agent. However, since he cannot reveal the same just yet, he faces a lot of hassle in going through with the interview when he is asked about the nature of his previous work.

The first interview conducted by Ankur Warikoo, Co-founder of NearBuy went quite smooth until he asked Srikant to stay in touch with HR for a background check on his professional journey so far.

The next interview scheduled with Xiaomi Vice President Manu Kumar Jain, also proved to be very testing since he was asked to create a case study on the work he has done so far. So, although the package being offered to him was far more than the average one, he wasn’t still in a position to accept the offer.

The next virtual interview was conducted by Dunzo’s CEO Kabeer Biswas, wherein owing to wifi issues, Srikant believed that he would be posted at Lonavala instead of Lokhandwala for the position!

The last interview conducted with Oyo’s CEO, Ritesh Aggarwal was not just hilarious but also very intriguing. The interview felt a lot more like a free-flowing conversation with the discussion revolving around work-life balance to even the benefits of yoga!

The interviews are bound to leave you in fits of laughter with a bit of a reality check. This digital marketing campaign has left us all intrigued about not just the brands but has highlighted the Family Man in a very unique manner. We’re all looking forward to finding out where he does land a job ultimately!