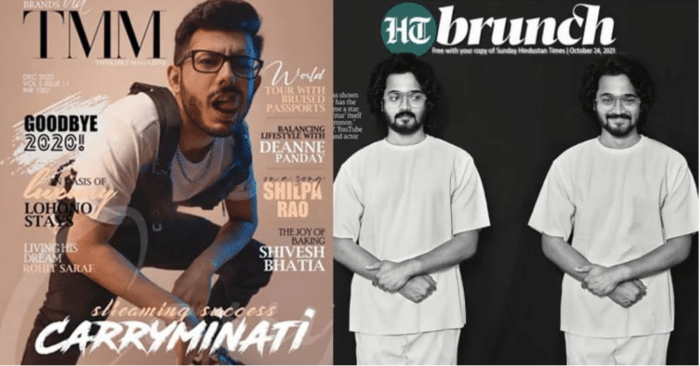 YouTube is one of the greatest platforms right now that is accessed by millions of people globally. The content here is easily accessible by people in any part of the world and that is what makes it an independent platform for users and artists to showcase their talents and work. In India, even few years back we could not think of creating a career via YouTube, but now the scenario has changed. The common man now can easily opt for a career via YouTube. In the recent times we have seen and come across many such instances where a middle class Indian has made a career out of YouTube and paved the way to stardom. Let’s take a look at some of these famous YouTubers who have made a name and created a space for them on a global platform:

BB Ki Vines aka Bhuvan Bam is currently the top most and buzzing names when it comes to creating content and making a name out of it on a global platform. A middle class guy from Delhi, who started off in YouTube just like that, never intending to make a career out of it, has indeed come a long way. Starting form playing different characters for his videos in BB Ki Vines to acting in a web series and winning Filmfare award our guy-next-door has made it to the epitome of success. He has also been a part and created his own original content and productions along with channelizing his focus towards his passion, that is, music. His originals such as Teri Meri Kahaani, Safar, Saang Hoon Tere etc, are a massive hit. Recently he also appeared in a music video named Kill Chori with Bollywood star Shraddha Kapoor as well as wa sa part of the promotional event of Money Heist on an International level!

We all have come across CarryMinati videos, haven’t we? A brainchild of Faridabad’s Ajey Nagar, who is currently a buzzing and most popular streamer and YouTuber not only in India but on a global level. His videos mainly include roasting and making funny videos out of it that has gained a lot of popularity via YouTube. Some of his biggest achievements include being shortlisted in, Time’s 10 Next Generation Leaders and Forbes 30 Under 30 Asia.

An Indian YouTuber and influencer who made his debut from YouTube videos with his multiple characters. He is one of the YouTuber of India who grosses his 10 million subscribers in a very short span of time. His channel named Ashish Chanchlani Vines has been a platform for people to engage and relate to his content. After completing his school life, he got enrolled in Datta Meghe College of Engineering, in Navi Mumbai, to get Civil Engineering. After which, he started his Channel “Ashish Chanchlani Vines” in 2014. Before he becomes a YouTuber he used to share his videos on various social media platforms. He drops his study to give more time to his Channel which is a massive success now. He was acknowledged with ITA Awards for Popular Digital Influencer as well as made a remarkable position in the short film and web series industry.

One of the most known figures when it comes to comedy and YouTube. One of Bhadana’s videos was featured on YouTube’s 2018 Global Top 10 Videos list. His videos include a dub on a song by Eminem and a reply to the song “Hello” by the artist Adele. In December 2020, esports and mobile gaming platform Mobile Premier League appointed Bhadana as their brand ambassador along with that Bhadana was listed in Times of India “Most Popular Indian YouTubers” in 2021 and DNA listed in “Richest YouTubers 2021” list as well.

Every gamer must have come across this name once, Total Gaming operated and created by Ajju Bhai aka Ajay. This name is searched by millions of people in order to know who Ajju bhai really is and how does he look, but the mystery remains unsolved till date. Total Gaming channel is one of the top most gaming channels not only in Indian but on a global level with a subscriber count of 29.7 Million. Apart from being an YouTuber he is also a full-time software engineer.


And it’s a wrap! Here was a list of some of the most influential and buzzing personalities of YouTube from India who have made a remarkable position on global platforms as well via there creativity and hard work.