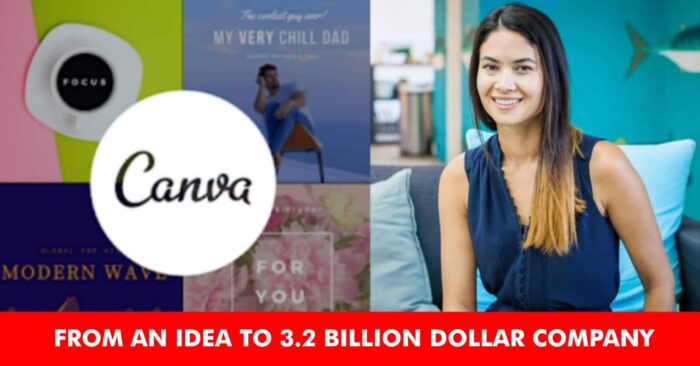 Melanie Perkins was always passionate about traveling. And one that her passion taught her was the needs and challenges of people across the globe, especially the inaccessibility of online services due to language barriers.

Keeping this thought in mind, Perkins co-founded Canva in 2012. Canva is an online design startup that allows anyone to design everything from greeting cards to calendars, with its services currently being offered in over 100 languages.

While talking about Canva, Melanie said,

It’s incredibly important to have a global outlook of the world we live in and be able to serve our community with products that are meaningful to them.

How It All Began.

In its first year of launch, Canva had more than 750,000 users. In 2015, Canva for Work was launched which gave businesses a tool for producing marketing materials.

In January 2018, Perkins announced that the company had raised $40 million from Sequoia Capital, Blackbird Ventures, and Felicis Ventures, and it was valued at $1 billion.

In May 2019, the company announced acquisitions of Pixabay and Pexels, two free stock photography sites based in Germany. These sites allow individual photographers to share their work for free, and the photos can be used by Canva users in their designs.

To Where They Are Today.

As of 2019, Canva last raised at a $3.2 billion valuation and has over 20 million users across 190 countries. Apart from this, Melanie is one of the youngest female CEO to be leading a tech startup valued at over a billion dollars.

Melanie found an opportunity in an untapped market that hadn’t been touched by any new companies for a long time. It was ruled by some big players like Adobe, and Melanie had this vision to take this market and change it.