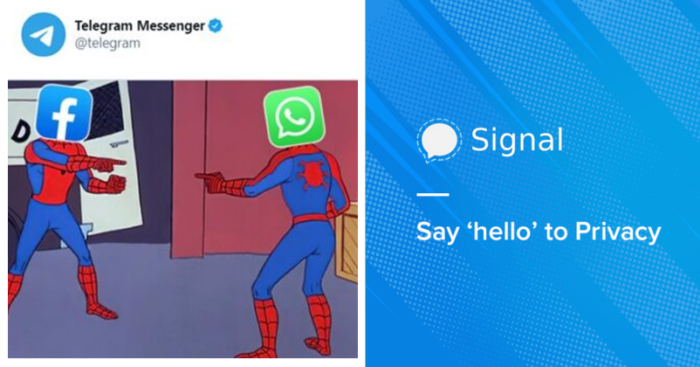 With WhatsApp’s recent updates on its privacy policy, it has received quite the backlash from various individuals and organizations. Many users have switched to other messaging apps like Telegram and Signal to prevent their private information from escalating to Facebook and other third-party applications. This has also promoted moment marketing by different messaging applications, taking due advantage of this situation to market themselves better. How did they go about doing so?

WhatsApp is a case study on why E2EE alone isn't enough to maintain control over your data.

Session elaborately explains how end-to-end encryption ensures that no private details such as your personal data, voice recordings, video calls, and credentials are accessed via third party users. Even if your friend is sitting right next to you and chatting via the app, the data remains confidential within the chat itself. Session compared itself with WhatsApp to show the distinction.

Telegram went out a limb to try its hand at meme marketing. These minimalistic memes are delightful and show how WhatsApp and Facebook are linked with each other, sharing a user’s data from one platform to another, and with third party users. Telegram’s owner Pavel Durov pointed out how Facebook had a dedicated team that worked to understand how Telegram gains its popularity. He declares that the platform has what WhatsApp doesn’t – ‘respect for its users’.

Facebook is probably more comfortable selling ads than buying them, but they'll do what they have to do in order to be the top result when some people search for 'Signal' in the App Store.

P.S. There will never be ads in Signal, because your data belongs in your hands not ours. pic.twitter.com/waVPcl4wHe

Signal is being declared as the most trustworthy alternative for WhatsApp, having been funded and recommended by Tesla CEO, Elon Musk. He had tweeted earlier how everyone should use Signal and that he would donate to them, the same way he had a year back. Musk doesn’t have any vendetta against WhatsApp but is often seen butting heads with Facebook CEO Zuckerberg with regards to his lack of understanding of the AI technology.

Viber took advantage of the situation to point out how so many things can go wrong when using WhatsApp. This app was released years ago but lacked popularity due to WhatsApp’s rise and demand. Now with the lost trust, the platform is hopeful to become visible again.

We want to address some rumors and be 100% clear we continue to protect your private messages with end-to-end encryption. pic.twitter.com/6qDnzQ98MP

Would you trust WhatsApp’s genuineness or make the move to a new messaging app?