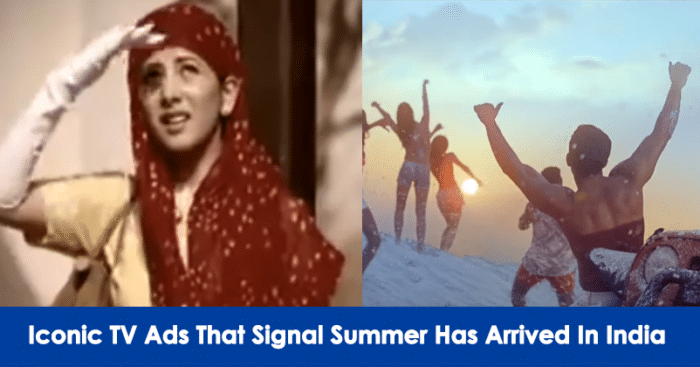 India has been experiencing an extremely hot wave during this summer season. Every part of the country is reporting temperature like never before. While there is only so much we can do about the rising heat, there are brands that have always come through to help with the heat.

There were ads during the late 90s and 00s that have always been considered an announcement of the summer season in India. Dermicool to Navratna ads, there are many that strike a chord of nostalgia amongst many of us.

The ad by Dermicool is undoubtedly the declaration of the arrival of the summer season in India. The iconic ad which was launched more than a decade ago still brings a lot of nostalgia with it. The jingle sang by Kailash Kher is still one of the most popular ads by Dermicool to date.

Glucon D is something that every Indian household serves to their family members as well as guests. It becomes customary to keep a large pack of Glucon D in summers and everyone loves it. This one ad by Glucon D has been always with us. The sun sucking out all our energy with a straw is an image we all had in our minds for years during summers.

Who doesn’t love to have a cold drink in summer? And a cold drink that comes with the goodness of milk is all one needs. Amul range of Amul Kool drinks in different flavors has always been a hit during this time of the year. ‘Amul Kool Chill Your Dil’ is a song we can all sing together.

Rooh Afza, a drink that has united the nation on many occasions, has always rolled out some of the most heartfelt ad campaigns. Especially during the summer, Rooh Afza’s ad campaigns have always touched a chord with almost everyone.

Cinthol Soaps have a way of making their way into the Indian household during summers. The soaps work wonders when it comes to helping with the heat waves. The ad by Cinthol is enough to put a smile on our faces.

The sale of coolers and air conditioners skyrockets during this time of the year. People look for different ways to escape the heat. Going on a vacation on the hill stations is always number 1 on that list. And the ad by Voltas for its Fresh Air Cooler tells you just why you need not leave your home to enjoy the fresh cool air.