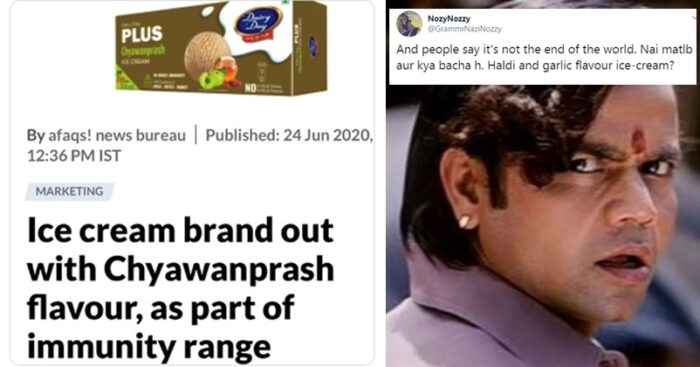 A lot of people consider their health as top priorities in life and set their diet according to a well-balanced plan. Keeping that in mind, an ice cream company in Karnataka has just launched its ‘haldi’ (turmeric) and ‘chyawanprash’ flavoured ice creams! Sounds yuck, right? It’s actually beneficial for your immunity and flavoursome since the turmeric variant comes with pepper and honey, and the Chyawanprash variant comes with dates and amla as well!

The end is nigh. Also, eww. pic.twitter.com/X7xZRgrE1b

Twitterati did NOT have any of it, and some of the reactions included those from Tahira Kashyap Khurrana, and also RJ ginnie as well.

What what what who wants to eat this ??? Yikessssss

These ice creams will be 30 per cent more expensive than the brand’s other flavours, and the reactions this recent launch is a mix of sad and funny. What’s your take on this?

Never gonna try even out of curiosity!!! pic.twitter.com/7lsn07jiiW

And people say it's not the end of the world. Nai matlb aur kya bacha h. Haldi and garlic flavour ice-cream?

Someone even pointed out how Amul had suggested a similar concept back in the day!

Back in 2002, Amul had conceptualized a herbal icecream that would also offer.. err.. other benefits : Amul IsabCool, icecream fortified with isabgol. I'm guessing the market for relaxatives didn't work out.

We think it’s a fun experiment and it might actually turn out nicer than assumed!