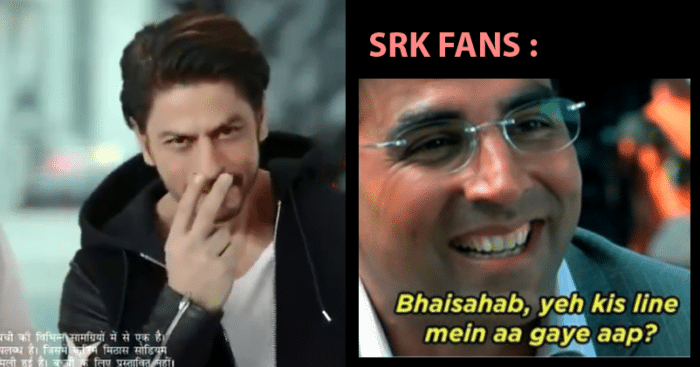 Have you ever seen actor Shah Rukh Khan in a pan masala advertisement? One would never expect the Bollywood superstar to go out of his way to enter this segment of the industry. Usually carried out by actor Ajay Devgn, it seems the actor was able to rope in the megastar as well in this new advertisement for Vimal Paan Masala.

Indian fans were definitely not expecting this. As Khan’s first time in an ad like this, no one expected Ajay Devgn and Shah Rukh Khan to collaborate ever. Fans are definitely surprised and Twitter is flooded with memes requesting him to not give everyone a cultural shock.

The pandemic changed lives, didn’t it? Guess, it did so for more than just a few people. In a way, it is great to see this versatility come out from our favorite stars in B-Town.

Check out some of these hilarious memes based on this ad.

This definitely seems to be a crossover between two universes, like Marvel or DC ever would.

Some fans couldn’t control their emotions and flooded relatable content asking Shah Rukh Khan not to do this.

Srkians to SRK after watching him in #Vimal adv. pic.twitter.com/CXAsLZ92Py

A quick-witted fan also pointed out how Shah Rukh Khan had given his word to Ajay Devgn’s wife, actress Kajol that he’d do anything for her. This was from the script of one of their popular movies.

Relax Guys #ShahRukhKhan did Vimal ad & he has the reason pic.twitter.com/WvKAjb80Oe

What do you think of this crossover?

We’re just happy to be here in an era that made this possible!