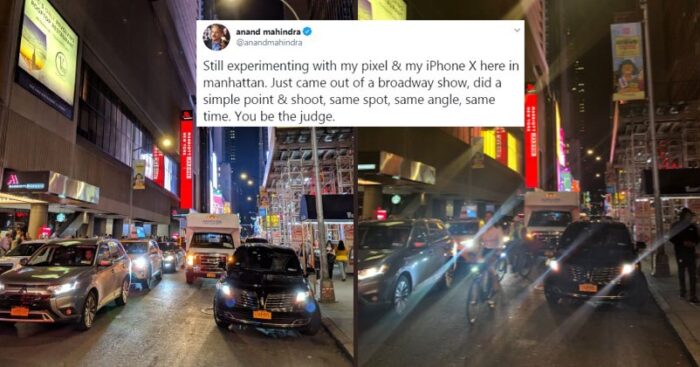 If only the cut throat rivalry between Apple, Samsung and Google was not enough, Anand Mahindra has now triggered a debate on Twitter after he posted an image clicked through his Google Pixel smartphone and compared it the one clicked with iPhone X.

While the industrialist stayed away from passing any judgement, he left the Twitterati incharge to evaluate the images and decide the winner for themselves.

The tweet read, “Still experimenting with my pixel & my iPhone X here in manhattan. Just came out of a broadway show, did a simple point & shoot, same spot, same angle, same time. You be the judge.”

Still experimenting with my pixel & my iPhone X here in manhattan. Just came out of a broadway show, did a simple point & shoot, same spot, same angle, same time. You be the judge. pic.twitter.com/bf1LoDrN61

The tweet instantly went viral and managed to garner over 8K likes and 1.7K comments.

Here’s what Twitterati had to say:

One lens is not clean.

Picture in right side is more clear. I judge camera clarity after zooming the picture. One which get less blurred when you zoom the pic is good as per laymen like me. By the way if you love pixel more than iPhone X you can gift iPhone X to someone like me.

Pixel comes out ahead with better dynamic range,colour reproduction and less chromatic aberration!

A Twitter user took his chance to and replied to Mahindra asking him to gift his iPhone X incase he didn’t like it. Here’s how our favourite Twitterati replied.

As the late actor Ajit would have said: ‘Smaaaaaaart boyy!’ But no-go mere dost. I plan to keep both. https://t.co/9HaC7EZwdS