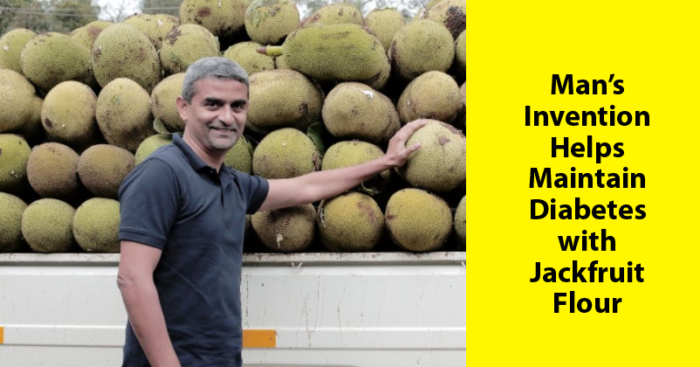 Jackfruit is a wonder fruit known globally to control and maintain diabetes in patients. Unlike other fruits that are high in starch, jackfruit works in a reverse method to help diabetes patients live their lives normally. So when Vinu Nair, a 51 year old diabetic man from Kerala started adding green flour made of jackfruit in his diet, his levels were controlled considerably in addition to cholesterol levels as well. He hasn’t looked back since then.

Vinu has developed healthy habits by exercising up to thrice a week and completing at least 60 to 70 km every month. Earlier he used to mix his medications with the flour in his diet which reducing his power for reading. Soon he realized how the flour was controlling his diabetes, and within 4 months, he had completely removed the medication from his daily routine. Who has helped him achieve this?

How Has Jackfruit 365 changed lives?

The owner of Jackfruit 365, James Joseph, is the brainchild behind this new innovation which has helped many diabetes across the country live their lives fully. The company is two years short of a decade and sells frozen jackfruit. The company has won a National Startup India award. Jackfruit 365 was established 8 years ago but green flour made of jackfruit turned to be an accidental discovery which was also mentioned in Joseph’s book ‘God’s Own Office’. This became an incidental read by Pt. Jawaharlal Nehru who wanted to meet Joseph in person. Taking the opportunity, Joseph pitched the idea to Nehru who asked him to think of a way to incorporate jackfruit into people’s diets without changing them.

Thus, green flour came into existence which has revolutionized Joseph’s business. This flour can be used to make the daily phulkas and dosas. You can purchase green flour on Amazon and BigBasket, and this is highly beneficial for those who suffer from diabetes and might be at a risk from the coronavirus, especially during the pandemic.