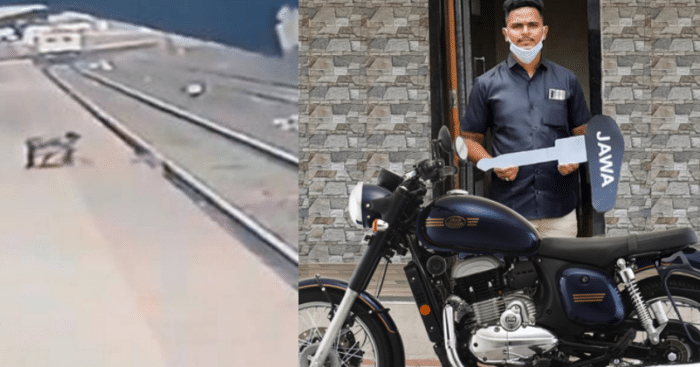 Internet is full of content that offers entertainment and more. There have been many real-life instances that have been captured and uploaded online. Some entertaining, some heartbreaking while some have sparked hope.

One such video recently went viral on social media. Mayur Shelke, a Railway pointsman at Vangani railway station near Mumbai, bravely saved a child from an oncoming train when he fell on the railway tracks. Ever since the video has gone viral on the internet, people have praised Mayur for his courage and quick thinking.

Shelke’s act of bravery earned him praise from Railways Minister Piyush Goyal and he was felicitated for exceptionally courageous act. Central Railway’s Divisional Railway Manager and staff rewarded him with Rs 50,000.

Soon after, Anupam Thareja, co-founder, Jawa Motorcycles, promised to honour him with a motorcycle under the Jawa Heroes initiative. And he fullfilled his promise without any delay. The company recently gifted him the keys to a brand new Jawa Forty Two. The company shared a post on Twitter honouring Mayur’s valour.

We were honored to meet Pointsman #MayurShelke at his residence & hand over the Jawa forty two Golden Stripes Nebula Blue as appreciation for his selfless bravery as part of the #JawaHeroes initiative. More power to you Mayur & loads of respect from the Jawa family & #Kommuniti. pic.twitter.com/LalvesyOsL

Overwhelmed by all the applause he is receiving Mayur did something that amazed us all yet again. Regarding the award money he received, Shelke said that he will be giving half of the amount away to charity.

The news of his thoughtfullness went viral yet again and Anupam Thareja was one of many to tweet in appreciation. He tweeted, “Watch again this courageous railway pointsman Mayur who threw caution aside to rescue visually impaired Sangeeta Shirsat’s young son from the tracks. And I just heard he donated half his prize money to the mother-son duo. I was awed before, am now humbled.” Salute!

Watch again this courageous railway pointsman Mayur who threw caution aside to rescue visually impaired Sangeeta Shirsat's young son from the tracks.
And I just heard he donated half his prize money to the mother-son duo. I was awed before, am now humbled. Salute!@RailMinIndia pic.twitter.com/oCrirFhSOa

Hetold ANI on Thursday, “I’ll give half of the amount, given to me as token of appreciation, for that child’s welfare & education. I came to know that his family isn’t financially strong. So I decided this.”