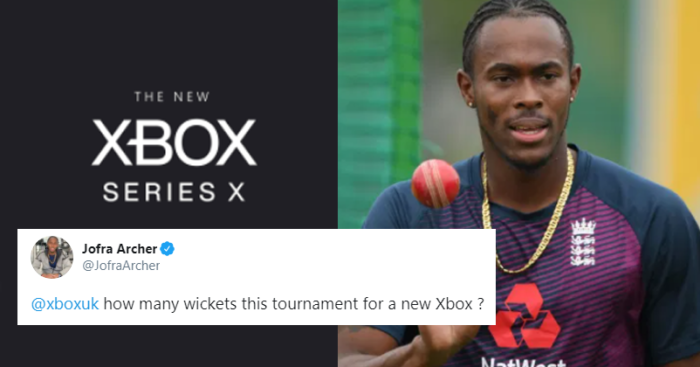 IPL has brought back a lot of action that was missing from the life of Indians. Not only cricket fans but brands also making the most of this league as we are regular innovative posts by brands on social media.

What’s making us write this article is that Microsoft has decided to gift Xbox to Rajasthan bowler Jofra Archer and the story behind this is very interesting. As we all know Jofra is known for his fast bowling and he is very active on Twitter also. His previous tweets have gone viral and he had tagged the Xbox UK Twitter account of IPL asking how many wickets they want to pick him to get the new gaming console.

@xboxuk how many wickets this tournament for a new Xbox ?

To this, Archer has replied with a GIF showing noted…

As Archer got the wicket of Warner in the recent match against SRH, he was quick to remind the company about the promise.

One and only royal mirage 🥰 https://t.co/2B5Z4mZHdN

And they agreed to this by asking for his address.

okay @JofraArcher, DM us your address then

Here’s how netizens reacted to the whole incident.

@xboxuk one of the best social media teams on Twitter.

@Xbox he got enough. Can we get a chance to predict and win ?

This surely is one great way to get the attention of people on social media.

Also Read: From Amul To Netflix India, How Brands Paid Tribute To MS Dhoni On His Retirement