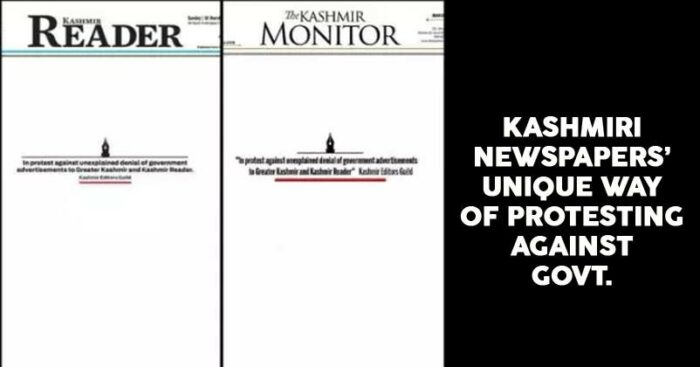 Most of the leading English and Urdu newspapers in Jammu and Kashmir published blank front pages in protest against government’s suspension of advertising to two local English dailies – Greater Kashmir and Kashmir Reader.

The first pages of these newspapers only had a message from the KEG saying “in protest against unexplained denial of government advertisements to Greater Kashmir and Kashmir Reader.”

Why all this is happening?

In February, the J & K administration had suspended advertising to the two newspapers without providing any valid reason. The Kashmir Editors Guild had earlier said in a statement that the state administration is trying “deliberate strangulation and subversion of the institution of media in the state”

Since the ban, Greater Kashmir has reduced its edition of 20 pages to 12 pages, while Kashmir Reader has cut four pages and is down to publishing a 12-page edition, according to the Free Speech Collective. 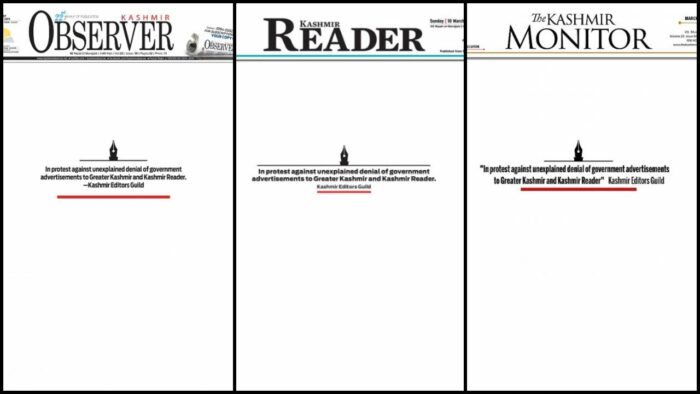 Last week, the guild demanded a response from the administration.

“At a time when world’s largest democracy is readying for one of the major electoral exercises on earth, the Kashmir editors’ guild is lamenting over the continued denial and unexplained halt to the rightful disbursal of government advertisements to Kashmir’s two major daily newspapers – Greater Kashmir and Kashmir Reader,”

a guild spokesperson said in a statement.

For those who don’t know, Greater Kashmir was already banned from getting advertisements from the central government’s Directorate of Advertising and Visual Publicity in 2008. In 2016, Kashmir Reader was banned for 3 months during protests by the coalition government of the Bharatiya Janata Party and the Peoples Democratic Party.

Bashir Manzar, general secretary KEG and editor of Daily Kashmir Images believes that the government’s decision has the potential of impacting the state and the status of journalism in Kashmir.

What are your thoughts over this controversy? Do let us know in the comments section.