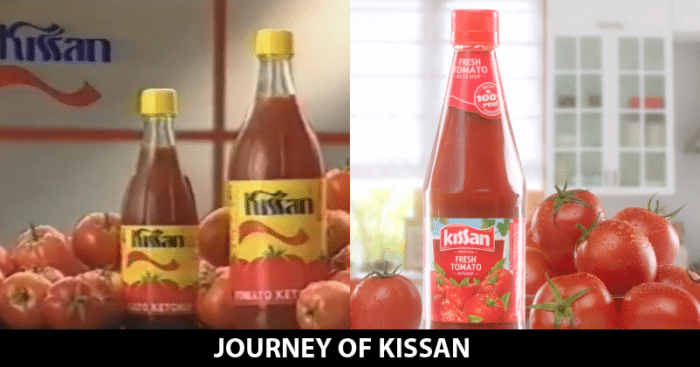 Kissan, which was acquired by Brooke Bond and started in 1993, started off informally as a spot that sold fresh pickles from farmers in Punjab, at a train halt near a processing unit. The UB group, under the Late Vittal Mallya then, acquired Kissan from Mitchell Bros during the British Era. Later on, Kissan went on to be acquired by Brooke Bond India which is now an integral brand under Hindustan Unilever Limited.

Kissan, right from its initial stages, has been a pioneer in launching new formats of food, the likes of canned fruits, vegetables and baked beans. The focus of the company has primarily been in uplifting small farmers to produce quality sourced ingredients. As per statistics, Kissan sourced 76% of its tomatoes used in the ketchup from sustainable sources.

Hindustan Unilever Limited also provides support in terms of training the farmers to gain expertise in the field of agriculture, particularly in growing tomatoes. It also endorses a policy of giving a buy-back guarantee of produce to farmers. The company also sees to it that the farmers are educated about the newest technology in the market be it irrigation practices or even recommending the right types of seed to be used for cultivation. For instance, a variety of the tomato was developed which takes farmers far lesser days to harvest than the average time to be consumed for the same task under regular processes. This allowed Hindustan Unilever to develop a wide supplier base with all farmers wanting to endorse this technology which assured higher yields and in turn maximum returns.

The brand sources all ingredients across all parts of the country and stands to empower the nation’s farmers. The advertisements also portray the same and have always promoted the message of their products being farm fresh.

The old ads particularly focused on the freshness of the ingredients being used in their products and communicated a sense of refreshment on the consumption of their ketchup, jams and pickles. The ideology of being full of natural goodness was promoted and that the kissan ketchup could be used as a side for every dish that one would eat.

Their most recent ads give more focus to farmers and also adds a personal touch to the communication. With visually appealing graphics, the brand garners the interest of all its target audience. It observes a form of series in which a story is being read out and it attracts the younger generation towards consuming the ketchup.

The brand has always maintained its core identity and depicted marketing strategies that have enhanced its appeal amongst all Indians to now becoming a household name.