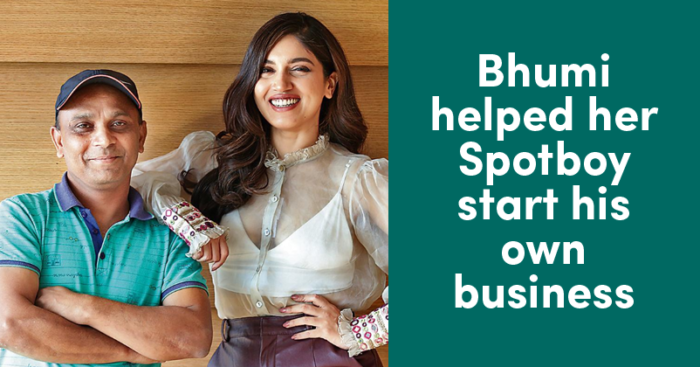 In a recent news, Bhumi Pednekar helped spot boy Upendra Singh to start a new business. Singh has been working with Bhumi for four years now.

Upendra has recently started a vanity van manufacturing company. And the first van he manufactured was for Bhumi herself. He says that to start this business, it was the actress who motivated & encouraged him.

While speaking about the business, Bhumi said that she has known Singh for 4 years now. And during the shoot of ‘Sand Ki Aankh‘, Bhumi suggested to Singh that he should think of starting a Vanity Van manufacturing business. I sincerely feel that everyone should get opportunities in life. They are such people, without whom I would not really be like this and I will keep doing whatever I can for them. He started a company called Akash Vanity (Akash is his son’s name). So, they have presented their first vanity van to me and they have done it for me and they have really worked hard on it.

Upendra also had a lot to say about Bhumi‘s contribution,

The van that Singh presented to Bhumi is special in every way. After investing a lot of time & effort, they made a specially customized van for the actress with her initials. The van also gives a very homely feel to the actress with colored glass & beautiful pink walls.

Bhumi wishes that what started with just one van will soon reach hundreds and that the company ends making a huge name in the industry.