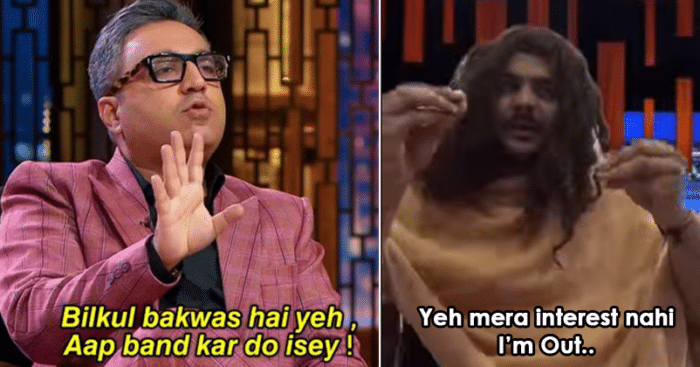 Shark Tank has been one of the longest-running shows in the US. Since its release in 2009, many aspiring startups have found success thanks to the investment they received from the sharks.

Even though there were many that failed to attract the judges, some were able to do well with just the exposure they received on the show.

After having a successful run for more than 12 years in the west, India has its own Shark Tank now. The show was released in Dec’21 has become really popular.

In a very short span of time, the show is making a buzz in regards to the business ideas presented by the entrepreneurs featuring on the show, as well as the famous faces that are judges and investors on the show.

However, Indians have been known to give all-around attention to any latest release. From meme fest to reels, there have been a lot of posts on the show that have made it even more popular.

Take a look at some of the hilarious memes on Shark Tank and on the judges of the show that are making rounds on the internet. Many brands have also jumped in and made the most of the growing trend.

When you want to order a pizza and look for offers.

Worst he could say is “Sorry I can’t invest.”
Meanwhile Ashneer : #SharkTankIndia pic.twitter.com/JAnfYnj34C

Explaining mom about my New Start Up idea after watching #SharkTankIndia

When you ask your friend to pay back the udhaar
Friend: pic.twitter.com/GZmEzlN7kl

*looking to add flavour to my food*

Many influencers have also made reels on the show and brought out the best of Sharks in them. Rohan Joshi, Kusha Kapila, and others have been entertaining their followers with some of the best shark content on Instagram.

These are just a hand full of posts from Linkedin. The engagement of the show has been so high that it is impossible to share with you all the posts shared on social media in just a month of the release of the show.

Shark Tank India is not only helping startup founders to gain exposure and avail investment opportunities, but it has also been successful in educating laymen about business and what goes into it.